Mark another milestone for Lake Okeechobee

It’s hit the 14 ft water mark, just in time for the one-year anniversary of Fay, and – and as the roll of the tropical dice would have it – in time for the first significant tropical moisture of the storm season, Ana.

If you remember from last year, the Lake had just broken the 11 ft plane (after a 511 day consecutive streak below it) in the days preceding Fay’s arrival.

Although we measure the Lake in linear feet – as in how high it will rise or how low it will drop – the true story of the lake is told in the delivery of three-dimensional feet to the coastal estuaries (in the form of cubic feet per second), as predicated by a game of inches – as in rainfall … which falls on the lake itself and upstream Kissimmee.

How those rivers flow is a function of the rain that falls, and the rules of the gates through which it passes.

In that regard, it’s been three consecutive years of below average rainfall.

The result has been lower discharges down the Caloosahatchee (and on the other coast – the St Lucie).

Wilma capped a record flow year of memory for the Caloosahatchee in 2005. The equivalent of one full Okeechobee lake volume (4 million acre feet, which is the lake volume at a 15 ft elevation) passed through the S-79 into the estuary that year.

Keep in mind that only about half of that Lake volume was from Okeechobee. The rest came from outside the other side of the levee, what we call watershed flow.

There’s a tendency to separate those two sources of water – and to be sure, each has its own distinct water chemistry, but for the estuary – to a degree – it doesn’t matter:

The primary parameter of concern is fresh water. 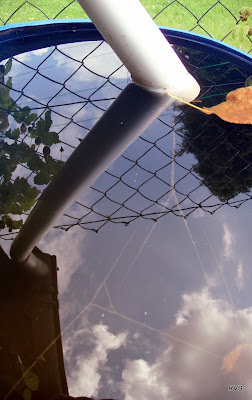 Too much of it for too long pollutes the brackish water balance of the estuarine ecosystem.

Pulsed releases from the Lake are an attempt to keep the balance in check, but the gate controllers are relegated to working the margins for the most part. A storm like Wilma, or Fay can easily overload the system … and the balance.

If and when they come are future milestones.