If you ever needed more proof that Big Rain Days are year-round events, and not just delivered during the summer wet season, then check out the graph below, provided by South Florida Water Management District meteorologist Eric Swartz.

It shows the daily maximum and minimum rainfall for the entire calendar year, from January to December, for a 15-year period from 1992 to 2006.

This is a classic example of a great graph:

It let’s you get “lost in the moment” of staring at data on the screen while simultaneously transporting you back in time of when the data was collected. It provides startling answers, and also raises new questions: some of which cast doubt on one’s underlying assumptions of what you knew before you looked at the graph.

I’ve been schooled in the tradition of rainfall being packages in units of “days, months, and years.”

But just like Cassius Clay famously threw his gold medal into the Ohio River during a frustrating moment of his quest to transport himself from the 1960 Olympic podium up to the professional ranks – adherence to the traditional rules of the hydrologic textbooks will only get a hydrologist so far in Florida.

(I sometimes ponder if I would have been better served by throwing my hydrology textbooks into the St Johns River upon my fateful crossing from the continent into the peninsula state.)

Florida hydrology plays by its own set of rules, and it’s the Exception (with a capital “E”) to those rules that are often the most important. 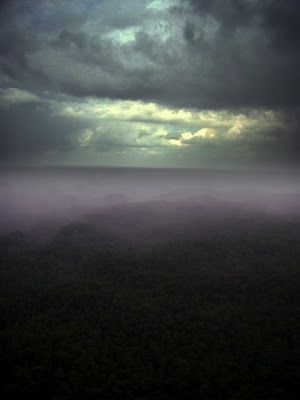 Case in point is Florida’s rainfall.

It drops from the sky in buckets – by the minute and by the hour: and rarely lasts for the duration of a full day. Florida water enthusiast Bob Mooney likes to point out to me that we get “rain by the hour and hydroperiods by the week” here in south Florida.

The same thing can be said for the Big Rain Months. They rack up the numbers at the hand of a few big days: sometimes just a single Big Rain Day. Think Mitch in early November of 1998.

Actually, speaking of Mitch, you can see Mitch on Eric’s graph. It’s the mother of all Big Rain Days. (Eric pointed out to me that once the graph is updated through 2008, Fay will generate a Big Rain Day of similar proportions.)

For me, I was surprised to see how evenly the Big Rain Days were spread throughout the year. They are more frequent and higher during the fall hurricane season, but the winter had more Big Rain Days than the spring, and even the early summer.

What set the summer apart was their consistent nature, even though they weren’t chart toppers, where as the Big Rain Days of winter were “spiky” in nature, often separated from one another by instance of little to no rainfall.

To be sure, there is more “gold” to be extracted from this graph.

That’s another trait of a great graph:
.
The more you look at it – over time – the more you see.