It’s high water season all over the Everglades.
.
But no place is higher – or deeper – than the southern end of Water Conservation Area 3A, where “sheetflow-in-waiting” backs up against the Tamiami Trail.
.
Using the Site 65 monitoring station as a guide: Water depths in southern 3A are currently over 4 ft deep!
.
That’s more a shallow sea than a seasonal wetland, even its tree islands are flooded.
.
Here’s a graph showing this year’s rise relative to previous “wet years” of note.

Since Fay hit in mid August, water depths in southern 3A have been tracking very similarly to the record flood year of 1995. 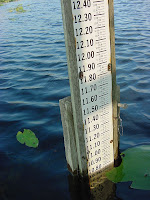 And it’s not just water depth, but its duration, by which record “wet years” are measured.

Four foot deep waters persisted for over 3 months in 1995, not to mention being preceded by a wet conclusion to 1994.

Compare that to 1999 when wet season water levels were tracking in ho-hum average territory for the entire summer … until the tropics started to cook up after Labor Day.

Or compare that to 2005 when it wasn’t the extreme depth (water depths never topped 4 ft that year), but the duration: depths exceeded 3 ft for almost 6 consecutive months, thanks to an incredibly rainy June (20 inches) that year. 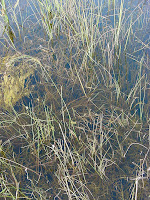 This year, while it was Fay that set the stage, it was last week’s rain — especially heavy rains over Miami — that’s pushed 3A up higher along the 1995 line.

And another interesting hydrologic story to follow in October!