One week does not fill the wet season platter,

And an early start at that.

This year’s May 11th start is over a week earlier than the long term May 20th average.

Meteorologists have been predicting an above-average wet season, but at least one forecast was calling for a later-than-normal start to summer rains — not an early bird special. 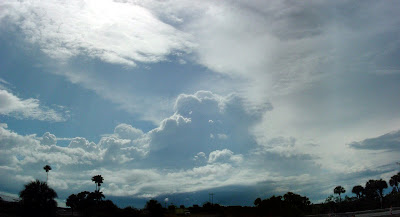 We can scratch the early part, but will the wet part still hold?

I don’t understand the full aerodynamics in play, but apparently the swing of the ENSO index out of La Nina and into the neutral phase may grease the wheels by enhancing our sea-breeze fed convectional thunder showers.

They are the bread and butter of the peninsular rainy season.

The past few days have been hybrid rains from a disorganizes swirl of clouds moving north from Cuba, and front bearing down from the continent, with a good dose of convectional uprising.

That sandwiched us with clouds rising from all corners.

It’s been a sight to behold.