Are we in the lull before the storm?

That’s a common question we ask ourselves this time of year. After a typical fast start out of the gate, the Florida wet season has sort of slowed down in the Big Cypress.

Swamp stage has stagnated in the prairie/pineland transition.

Actually, “stagnated” is a bad term – since sheet flow is back up and running.

What I mean to say is it hasn’t made the jump up into “peak water” levels (which typically we don’t see until September).

Of course the storm that broke last year’s lull was Fay. This week marks its one year anniversary.

As prodigious a storm as Fay was, what amazes me most is the percentage of total summer rains it accounted for. We would have saved its every last drop (if we could) had we known the epic winter drought that was to follow.

That leaves one to ponder “when, where, and how much” rain our late season storm(s) will bring this year.

But even they may be a mute point:

If the El Nino kicks in as predicted, we could be in store for an unusually wet winter instead.

That’s what happened in monumental fashion in fall of 1994, but that was a little different – it was in the second year of a concurrent El Nino. This year’s El Nino is a recent swing out of a La Nina. 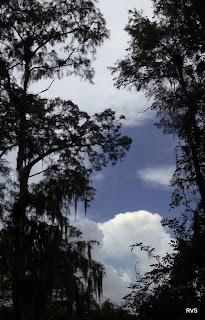 As always, the past provides only a partial road map at best;

When it comes to the weather (and water), what lies ahead is Agua Incognita …

Only time will tell.