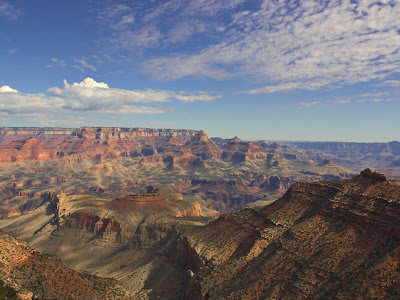 A view into the depths of the Grand Canyon, from the South Rim. Photo submitted by Chad Jacobs of Scottsdale Arizona.

It was a life time ago the last time I was at the Grand Canyon?
I can’t even remember what month it was, let alone what season.

These days, that’s not much different than how the Colorado River must feel.

Gone are the days when its banks ran full and its waters ran muddy with the spring snowmelt from its headwaters: The Rocky Mountains.

Is it summer, fall, winter, or spring?

Don’t ask the modern-day Colorado. It will tell you it’s just another day of living downstream of Glen Canyon Dam (and its hydro-electric releases).

But all rules have their exceptions.

In the case of the Colorado that would be the 40,000 cfs flow rate let loose through the canyon for a few days back in March: part of an experimental program to replenish sediment back on the sand bars that had dwindled under the repressed and regulated flow regime.

But those spikes are few and far in between;

And really, if you look back at the historic record, just a blip of what the river used to run, but when its seasons were still in order.

The graph below shows the Colorado’s daily flow rate through the Grand Canyon for 2008, and for two “wild and free” years – 1929 and 1931 – that pre-date any dam building on the Colorado.

Both of those years show distinctive spring peaks. The reason I picked 1929 is that it was the year that almost 20 million acre feet of water flowed through the Grand Canyon: about 4 times the volume of Lake Okeechobee!

That was a whopper of a year!

Compare that to the 6 million acre feet of water that flowed through the canyon in 1931.

Big swings were the standard back then, not the exception – and all at the whimsy of the winter snowpack and its springtime thaw.

Sadly, that makes it not such a fun graph to update any more.
(Hydrologist love to see the numbers change!)

But who said Western Water Law was fun anyhow? Water is a “fighting word” out west … and battle ground central for decades has been the Colorado River.

When the Colorado’s River was divvied up among the states it passes through in the 1920s, they put the carving knife to a 15-million-acre-feet-per-year water pie.

That was an overestimate (and part wishful thinking) based on unusually high flows recorded during the first decade or so that they put a measuring stick to it.

Don’t get me wrong: they were monitoring its flows correctly.

They “rolled up their sleeves” at the bargaining table with the data they had.