August rainfall numbers are in!

The East Caloosahatchee Basin lead the way with 15 inches of rain. That’s 6 inches more than the long-term 9 inch August average. The low basin on the totem pole was the lower East Coast’s Broward area: it tallied just under 10 inches.

But that’s sort of splitting “hares:”

Fay spread the rain around both abundantly and fairly evenly. All basins got wet … but some got wetter than others (Southwest Florida, East Caloosahatchee, Lower Kissimmee, and Upper East Coast).

Case in point was June of 2007: 13 inches fell in Miami-Dade, causing local flooding, but only 5.5 inches fell over the Lake, dropping it down to its record low. 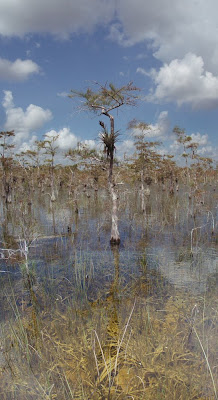 Around 30 inches of rain has fallen across south Florida since the start of June. Compare that to last year’s 21 inch total over the same June, July, and August period.

That difference is even more pronounced in southwest Florida.

Around 35 inches have fallen in the Naples and Ft Myers area since the start of June. That’s 14 inches more than last year’s June, July, and August of last year.

Since the start of 2000, south Florida has experienced 7 Big Rain Months by that metric. That averages to just under one Big Rain Month per year.

The years of 2000, 2006, and 2007 really jump out because they didn’t come even close to scoring a Big Rain Month … and not surprisingly, each was a drought year in its own way.

The Biggest Of The Big Rain Months was June 2005. An average of 15 inches fell across south Florida that June, with the Southwest Florida’s 21 inches leading the way.
.
Talk about getting a quick start to the sheetflow season. That year, the wetting front moved up into the hydric pinelands of Big Cypress National Preserve by mid June, and stayed there for 6 straight months, until early December. That’s twice as long as the typical year.

Which raises the question:
Is there any such thing as a typical water year?

And who could forget the consecutive Big Rain Months in August and September of 2004, which combined for a two month total of around 22 inches.

Those Big Rain Months were followed by a “hare-raising” jump in Lake stage – to over 17 ft (and briefly above 18 ft) – in October. We were in shock at the time to see the Lake rise almost 6 ft within a 3 month window. But in retrospect, that’s a fairly gentle rise compared to the Lake’s recent meteoric +3 ft rise in 2 weeks.

If we can conclude by going back to the basics — basic difference that is — of Big Rain Days and Big Rain Months.

What’s the fundamental difference between the two?

Big Rain Days can fall any time of year; but Big Rain Months are only found during the wet season.

Yes, we can get our Big Rain Days during the dry season – the Continental Front is one of Florida’s Four Meteorological Horesmen of the Atmosphere

.
It takes a steady dose of summer rains – in addition to a Big Rain Day (or two) – to chalk up a Big Rain Month.

It has the distinction of being our rainiest “dry season” month since the start of 2000, thanks two Big Rain Days of 1.5 and 2.25 inches.