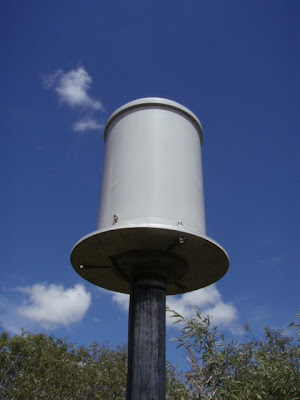 While I am hot on the topic of averages, here’s a bar graph showing annual rainfall in Big Cypress National Preserve from 1970 to present.

The reason I like this graph is that it allows you to see a couple of things at once:

(1) The top of each bar shows the full year total, for the 365-day period from May 1st through April 30th. Over the past 5 years, the preserve has averaged around 56 inches of annual rainfall.

(2) Seasonal rainfall is shown by use of “cool hues” for the wet season (May through October) and “warm hues” for the dry season (November through April). Over the past 5 years, the preserve has averaged 45 inches of rain during the summer wet season and 10 inches during the winter dry season.

(3) And if you are really interested, you can also zoom in and see individual months, shown by the alternating shading of warm and blue hues. Of note, the biggest rain month on record was June of 2005 with 20 inches. That’s twice the long term June average.

I also like this graph because it is a good reminder of how much rain has fallen in the preserve since my arrival in August 1998. It was an unusually dry “wet season” and the mosquitoes were ferocious (they almost scared me away). That was in part caused by the unusually wet dry season that preceded (as a result of the famous El Nino of the Century). And then the 1998 wet season was capped off with a bang at the end in the form of Tropical Storm Mitch. It dropped 10 inches of rain at the onset of November.

And because it fell in November,

it gets lumped in as a dry season event.
But it could just as easily be counted as an extension of the wet season.
And it goes to show:
Graphs are good … but they need to be carefully scrutinized.

take a look at this year’s wet season rainfall total.

it falls right on top of the running average for the past 5 years.

Maybe there is something to this “average” thing after all.