I call it that because it decodes, or rather recodes, the historic set of flow data measured at the structure – similar to the Rosetta stone – into a format that is useful for interpreting what is going on in the downstream estuary.

The preferred range of flows for sustaining an acceptable salinity balance in the estuary is 300 to 2,800 cubic feet per second (cfs).

Below that range saltwater intrusion creeps in,

Above it the estuary becomes over-diluted with freshwater.

The dots on the graph to the left show those instances — cool colors indicate too much fresh water and warm colors not enough. 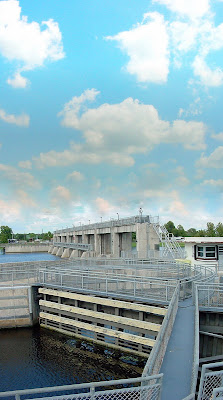 Lake Okeechobee is alternatively seen as the problem and the solution.

While the lake is not naturally connected to the river, tying the two together was one of the earliest and most pivotal moments in Everglades drainage history.

In modern times the river is used as both (1) a high-water release valve for the Lake – which runs the risk of overflowing the estuary with freshwater during the wet season – and (2) a hedge against inland-encroaching saltwater during the dry season.

It’s a complicated tale to be sure.

To be sure, the Caloosahatchee River “Rosetta stone” can’t answer every question, but it’s a useful translational guide to have around,

Especially if you happen to be on a boat in the estuary looking upstream.