Is the water cycle ever blurry?

Fog of course is nothing but a low altitude cloud.

The truth is that all clouds are blurry if you’re on the inside of them looking out, no matter how sharp or wispy the edges may seem from a distance. In fact it’s the clouds with the sharpest edges that are the bumpiest when you fly through them:

It’s a universal yearning to rise above the fog, but also maddening – blue sky is practically in grasp a few feet above the tree tops but it might as well be a world away.

Fog is safe in the sense it won’t cause turbulence on the ground (thank god!), but it is a safety hazard to drive through, especially with headlights at night through pea soup.

And it’s among the more difficult subjects to photograph: Besides being blurry, the lighting is muted and drab, and usually a “waste of film.”

(Does that expression still apply with digital cameras?)

I spotted this impressive cloud the other afternoon.

It was blurry like fog, but high in the sky and grabbing the luminescence of the late day sun. While it had the look of once being full of turbulence, the energy that formed it had evacuated its premises. 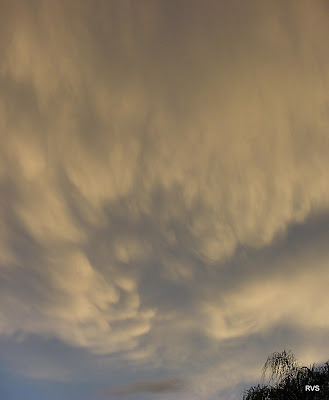 Call it a cloud carapace:

An instance of the water cycle shedding its exoskeleton and moving on.

Sheering winds had since moved in to smudge its side walls.

It was as clear a view of blurry as I’d ever seen.