Also known as the beginning of our winter dry season;

Or in other words – fall.

First a review of our wet season.

The “shoulder season” months are what set this wet season apart.

By “shoulder season” I mean the May and October.

They bookend the front and back ends of the wet season’s core summer months, and – like cathedral buttresses – receive on average about half the rain …

Although it varies from year to year.

May gave us an unexpected (and extended) deluge from a mid latitude low the parked out in the upper atmosphere a few hundred miles offshore in the gulf.

That proved to be both a drought “killer,” and a wet season “maker,” and fueled speculation that an epic wet season could be on hand (it wasn’t);

But most of all it provided more proof to the age old question as to “why is it that droughts always end in floods?”

We still don’t know … but it sure seems that way. 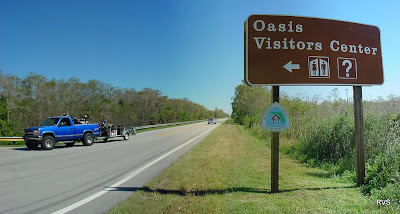 Spot cumulonimbus clouds sprouted across the skyline, but the regional sea breeze pattern fizzled on the vine, as did the El Nino thwarted tropical storm season.

Psychologically, that made for a “blue sky” fall (not a storm in sight!),

If also giving us a head start into the long dry season ahead.

(Swamp levels are at a two-decade low water mark for mid November.)

Turns out it could be a “wet” dry season instead:

The same El Nino that stifled tropical storms has a history of amplifying dry season rains.

There’s only one thing we can say for certain:

Fall is officially here … and finally!

Labor Day is the fall standard bearer up on the continent – but down on the south peninsular it’s an extra 10-week waiting game for night time temperatures to finally touch down on the 60º F.

That milestone is the inconspicuous metric used in Winsberg’s “Florida Weather” to identify the start of fall as it progresses down the peninsula. 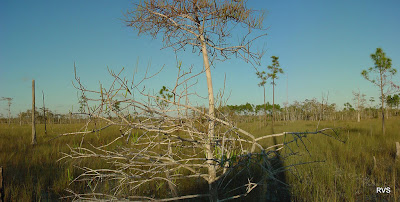 The more conspicuous one is the trees, specifically the cypress:

Their branches are bare
(because the needles have browned and fallen) …

That’s as sure a sign there is that it’s fall in the swamps!