South Florida doesn’t have winter as a “season,”

But we do have our cold days.

By that I mean days where the afternoon high temperature doesn’t break 70º F.

Using that standard, Naples has experienced “two” days of winter this winter, or rather I mean “dry season,” although those days also brought “wetness” … it rained significantly (and thundered) when that cold air came through.

It also stayed perplexingly dark – by south Florida standards – all day thanks to the low cloud canopy.

The other bell weather of winter are the “bone chilling” sub 40º F nights.

Those cause us all to “run for cover,” as in grabbing another blanket from the closet.

We’ve yet to have one of those this year.

Last year (as measured at Naples Airport) we had “three” – two in January (consecutive nights) and one in early February. 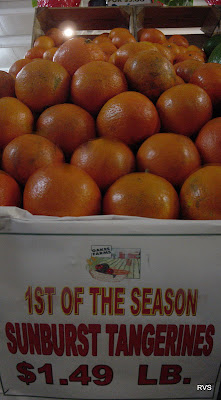 Then there are the “once-a-generation” hard freezes:

They are never long enough to ice over the swamps, but at a few hours around 28º F will freeze-damage oranges.

Sunburst Tangerines and Red Navel Oranges are now in …