Miami’s rainfall total in October, only half way through the month, has already matched September’s full month total.

But that’s not so much from a wet October, per say …

Again, that’s not because this year has been a dry “wet season” – it’s actually right at the 5-year 40 inch average … but because last year was so wet.

But wasn’t 2007 a drought year, and more correctly stated: The Drought of the Century?

.
And conversely, hasn’t summer of 2008 been billed as a return to drenchingly wet summer?

The answer to both is yes … prefaced by an acknowledgment that the water cycle is never uniform in all places, especially for a hydrologically hyperactive south Florida peninsula.

The big hydrologic stories this summer have been the Lake’s August rise and the September rise of water in the central Everglades.

Here’s a quick overview for those areas.

Flows from the Kissimmee into the Lake have dropped down to just a few hundred cubic feet per second.

Lake stage pretty much held steady for the entire month of September, at right around 15 ft above sea level.

Down in the central Everglades, slough water depths on the north side of the Tamiami Trail are measuring just over 4 feet deep. That makes that area a shallow sea, not a seasonally flooded wetland, but this sea has no archipelos: all the tree islands are flooded. 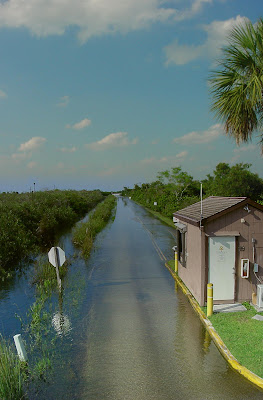 And all the S12s are open: that’s put high water to the south in downstream Everglades National Park as well. Even the entrance road into the Park’s Shark Valley tram and viewing tower went under water.

The good news is the waters appear to have crested. That wasn’t the case with 1999 or 1995 when those waters didn’t crest until late October and early November.

That leads us to Loxahatchee.

Bountiful rains in early October has filled its central southern sloughs with 2.5 ft of water.

That’s a half foot higher than the October average, and around three-quarters of a foot higher than just a few weeks ago in September … and also pushes the wetting front up into the tree islands.

The last time Loxahatchee has been this high … going all the way back to 2000 (and you won’t believe your eyes on this one) … was last summer!

Wasn’t summer of 2007 supposed to be a drought year?

Yes, but the “rain shadow” cast its sunny spell primarily on southwest Florida, Lake Okeechobee, and the Kissimmee: Loxahatchee and Miami were rainy and wet.

With that being said, no matter where you are in south Florida, look no farther than one month ahead into November for the start of another drought – our seasonal one.

We call it the dry season.