How does this year’s dry season stack up against others of recent note.

The graph below shows that both literally and figuratively.

The dry season of 1997-1998 was our wettest in recent history. That was the year of the second El Nino of the Century. The first such dubbed El Nino occurred in 1983. It had a dry season soaking of similar magnitude.

But it proves a point: don’t go making a call before the race is over, or in this case, the millennium is done – it still had 17 years to go!

Naming something “of the century” is often a subjective enterprise anyway. In this case the primary metric of measurement used is the amplitude of the pulse, not its duration.

If we went by the latter, a good case can be made for the extended El Nino that lasted from 1992-1995.
It never rose to the epic amplitudal heights of 1983 or 1998 (as measured by the ENSO index), but Florida State emeritus Morton D. Winsberg points out – author of Florida Weather: it’s the long lasting El Ninos that produce some of Florida’s biggest dry season drenchings, often starting in their second year.

If you haven’t noticed, this year’s dry season has been pretty rainless.

It’s not all that unsimilar to the first 4 months of last year’s dry season.

It was a cold front storm for the ages – blanketing Big Cypress National Preserve with 5 inches of rain.

That’s not quite Fay … but almost. 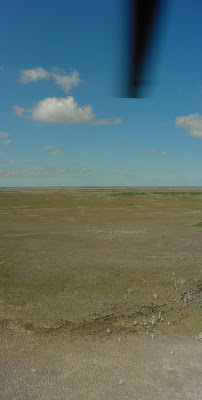 Maybe the better comparison for this year’s droughty dry season is the winter of 2000-2001.

And it goes to show, dry season are more about episodic drenchings – the coveted Big Rain Day – than regularly spaced storms that produce steady averages.

The defining characteristic of our dry season is that it’s our seasonal drought. The big question mark in the air is when and if that blue sky will be unpredictably punctuated by a Big Rain Day, or a pattern of stationary fronts.

It’s those events that make up for the other dry months. They are our stop gap dry season measure that keeps the seasonal drought in check until the giant meteorologic switch in the sky is flipped back on and the summer rains return.

Unless it’s an El Nino.

Most of the time.