Just how big is Fakahatchee Strand?

Even the grass that lines the road to get there is giant.

But rather a non-native intruder, although not all that invasive:

My initial guess was sugar cane,
Perhaps an errant wind had blown it in …

Long ago a ranger once cut open a stalk of wild growing cane for me to taste (remarkably sweet) and I’ve seen it used as a wind break between vegetable crops in nearby farms. 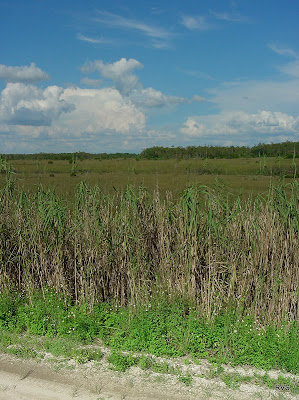 Climbing up high to look over it,

I was reassured to see it stayed close to the lime rock road:

As tall as Elephant Grass grows,
it’s quixotically skittish of the deeper-watered
marl prairie that lies beyond.

But won’t budge even an inch into that very same marl prairie,

Not because it’s too deep but rather too shallow instead. 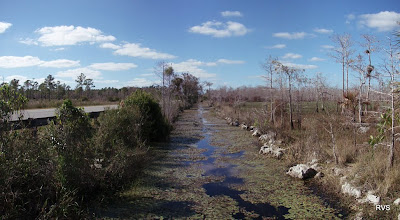 That sort of sums up the marl prairies:

Too wet for upland plants,
And too dry for aquatics.