It’s one thing to look at hydrologic data,

But it’s quite another to see a water control structure up close in person.

As with many water ways of Florida, I got to know the data of the S-77 before I ever laid eyes on its “lock and dam.”

Its data sets are discrete, add together nicely on a spread sheet, fit neatly into a graph on a single sheet of paper … and above all – rolls in day after day (… after day after day), right to the doorstep of my computer.

Years passed until I finally had a chance to see the S-77 first hand, face to face.

It’s no small task: It took hours to drive to, an equal time to drive back from, plus the time we spend on the water. I was giddy with anticipation to see the structure – as, say, meeting a long lost relative – but upon seeing it, I was stupefied by the giant sprawling conglomerate of concrete, steel, earth, and electric my eyes looked out on. 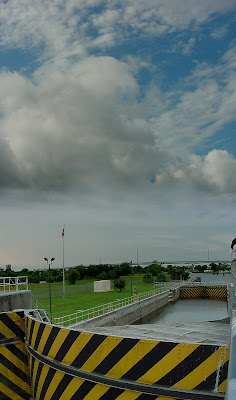 I drove away a changed hydrologist: never would I look at the S-77 data quite the same way.

I am a man of water, but not “a man on the water” as often as I’d like. To be a hydrologist in the Everglades, it’s important to take that time …