I don’t mean to over emphasize water … but I do, because, well, I’m a hydrologist;

As in the saying “if all you have is a hammer, everything starts to look like nails?”

While I am not a fire expert, I do know a good fire photo point when I see one, or saw one, as I did a few weeks ago on a drive along Alligator Alley.

This particular photo looks south along Turner River Road; the same road which served as a fire break during this year’s big spring flame – Deep Fire. 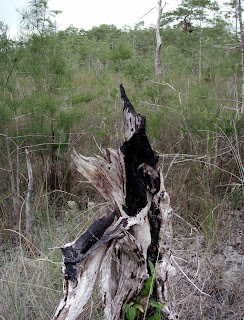 The cause of the fire a lightning strike.

Not only is it natural, it’s common: each square mile of south Florida gets around two dozen bolts per year (according to Winsberg’s Florida Weather).

That makes fire a big ecosystem shaper of The Big Cypress.

As for which is bigger: water or fire?

But then again, I’m a hydrologist!