While other fathers took their sons hiking in the woods, or fishing in streams, and for an elite few – golfing at the country club – my father found a unique way of combining all three. 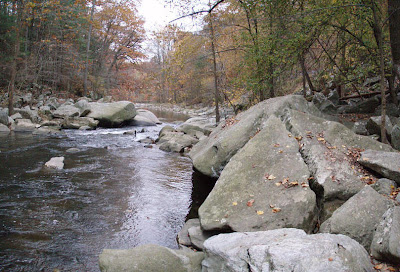 He’d roll the car to a stop on an undesignated shoulder of twisty country road. Then he’d cut off the engine. The “official” entrance of Winters Run country club was just over the rise, and, more importantly for my father – out of sight.

Two doors down, my friend’s father was an “official” member of the club, spent weekends there, donned its cleated shoe, khaki pant, and collared shirt attire, and strode the well manicured grounds in wide motions – tee after tee after tee after tee – refining the fine art of the golf swing.

My father had me “switch into my old sneakers” and further directed me to “hug the tree line” on our clandestine caper to where I was not quite sure – but as sons do, I followed him anyway – until we reached it: a crooked run of rapids with the same name as the country club, on the other bank of which flapped the flag on the green of the 16th hole.

“Some balls make it in that hole,” my father reasoned out loud, “but more make it into the stream.” (So that’s why he had me carry in a telescopic retractable ball scoop!)

First we scooped out what balls we could from the waters edge. Next we tip toe our way out on the rocks, and eventually into the shallows itself. The icy water soaked through my sneakers (it was fall).

We bagged a good many, enough for me anyhow.

But my father could not leave well enough alone. “Down there,” he said, pointing into a hole behind the riffle. “That’s where they all are!”

He was right – it was the mother load.

And it was also an ending I knew all too well.

Either a rock gave way or a patch of algae slipped him up: All I heard was a big “SPLASH!”

(But he got those golf balls. And it was the mother load.)

As funny as it is in retrospect, not only did we not laugh in the moment, we simultaneously, instinctively, (and silently) agreed, on the spot, as he emerged from Winters Run – in a silent “father-son” code – that yes, he did fall in the water, but no, he never got “wet.”

That was important to my father. Who is a good son not to oblige? 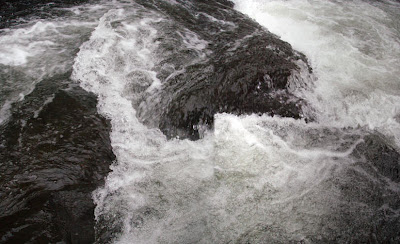 He had me play the 17th and 18th holes on our way back – as he watched in his sloshing wet sneakers – under the cover of shortened light of the dying fall days.

Thirty years later I still think about that water hole. That’s the hydrologist in me … and the son, (but not the golfer)!