The spring thaw is upon us.

That’s a bit of a stretch for Naples Florida since it never – or rarely – freezes in the first place, and when it does, it’s just for a few hours in the waning hours before dawn.

By thaw I meant warming.

Average daily lows and highs are on the upswing. 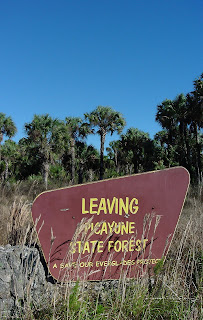 Here in Naples temperatures bottom out in mid January with an average daytime high of 75º F and nighttime low of 53º F.
They’re seeing the same warming trend “up north,” case in point being Pittsburgh, Pennsylvania (see graph).

The only difference is that Pittsburgh is still frozen.

Average night time lows are in the mid 20s. The good news is that average daytime highs have risen 10 degrees over the past month. They’re now in the mid 40s.
Compare that to Naples two coldest days of the year – January 21st and February 5th. You know it’s a rare day in Naples when daytime highs never make it above 60º F. In this case it was close: 56º and 58º F respectively.

You can see that if you click into the historical calendar graph below.

On one of those days I was out at Picayune Strand – braving the cold. That’s where I took the photo below. It used to be a man-made channel called Prairie Canal, but now it’s been transformed into a series of ponds to put water back into the adjacent wetlands.

As cold as it was, it never froze (not even close).

Up in Pittsburgh, they’re still waiting on their ponds to thaw.

Click here to view more watery images from around the world.