A walk in the woods is always refreshing, sometimes intentionally so … other times not. 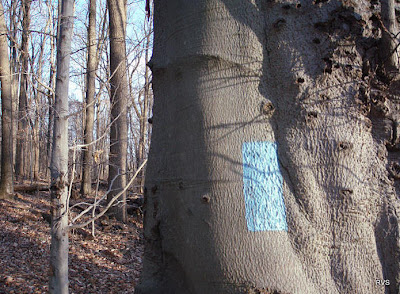 Maryland in winter is a time to stay on the path, which is usually leafless, but most often well marked.

Contrast that with south Florida’s swamps where you can scamper at will through needle-free cypress … going really wherever your heart wants to roam.

On the latter you’re guaranteed to get your feet wet,

But on the former, you’d be better off not to risk it.

My brother and I were unexpectedly in Maryland last January.

In what remained of the winter-dwarfed afternoon daylight on my final day, we headed out for a hike along the Gunpowder River.

Usually at some point on any hike with my brother he moves ahead – not so much intentionally, but as a natural instinct of him being slightly older and possessing a good stride. 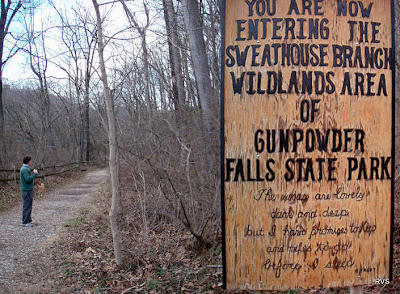 This time, however, was just the opposite –

He got hung up on an unexpected phone call.

I waited around at first – initially becoming captivated by a mysterious foot-wide ribbon of transparent water, which I straddled and watched slide across a bed of fallen leaves (it had recently rained) – but eventually I got an urge to move on:

It was cold (especially for a Floridian).

My brother would catch up.

The trail dropped along a steep grade, dipsy-doodled through a pine flat and passed beside a spooky roofless shanty, until finally I slowed to stop.

It wasn’t so much out of courtesy as it was necessity:

The path was gone!

In its place was a shin-deep freshet of fast flowing ice water, presumably fed from many of the same type of tiny trickles that I’d straddled and stepped over up higher on the hill.

It was not long thereafter that my brother came barreling down the trail.

All in an instant – and before I could say a word – he launched himself into the icy unknown.

Had he sized up the uncertain mix of stone, mud, water and fallen leaves so quickly? 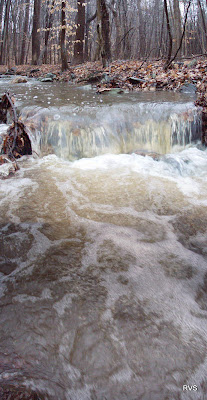 Two steps in (a good six were needed to cross) he found his foot falling with full weight through a hollow shell of leaves, followed by a “plunk” and a “splash” (and a few well placed “darns”).

He made it to the other side, but his shoes and socks where completely soaked.

He was stoic but steamed (if also freezing) – mostly at himself – but perhaps partly at me for what happened next.

A little ways upstream I found a spot that banked up high enough for me to jump – Tarzan like – to the safety of the opposite shore, arriving shortly thereafter dry toed by his side.

A year later aspects of the episode elude my grasp:

Had I failed in my one key duty of “hiking ahead” – to offer due warning and scope out alternatives for the predicament at hand?

Or was my brother just eager to “move ahead” on the hike (as he always does)?

Or was it as simple of him being preoccupation between two conversations?

Whichever the case, I let him take the lead for the rest of the hike.

I never felt so guilty about not getting my feet wet.