Calling play by play – week after week – for south Florida’s water cycle is easy when The Tortoise is leading the race. The Tortoise (evaporation) starts gaining ground on The Hare (rainfall) each Dry Season (winter), and – as we saw the past 2 years – The Tortoise can really stretch a lead if the summer rains don’t materialize.

That’s been the story for the better part of 3 years now.

But when The Hare wakes up – and springs into action, not only can it erase The Tortoises lead in a blink of an eye (taking just one week to do what The Tortoise did in 2+ years): quite frankly, its just hard to keep up with The Hare once it “pours on” the speed and springs the water cycle forward. 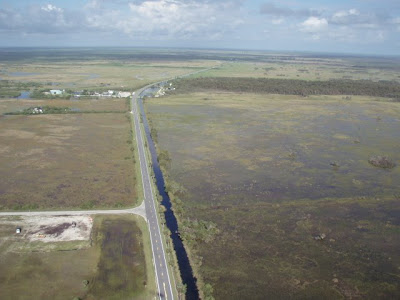 By “keeping up,” I mean trying to “stay current.”

And even when I get caught up, and finally get down to jotting it down with paper and pen (or in this case, on the computer screen) … lo’ and behold, I’ve already fallen back behind again: The Lake has climbed another rung on the staff gage.

Well, not yet actually. Last I checked The Lake was still below 14 ft, but not by much, and not for long. (Correction: I just saw in the Corps morning report that, as of yesterday, The Lake is a few “hares” above 14. … That’s case in point to what I am saying!)

But I’m not complaining. 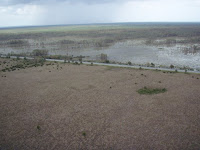 I’m glad to have the water back, and ample doses of it. But that reality is gradually being replaced with stony realism that there is a whole lot of number crunching waiting to be spun through the hydrologic grindstone.

I’ve often said that if I wasn’t a hydrologist, I would have owned a millstone and grind wheat into flour for a living, or something of equivalent value as the water trade.

That being said, I am going to momentarily hold off on rainfall. The start of September is just around the corner, so it makes more sense to run the rain numbers through the grindstone in next week’s installment.

If Fay has been crowned the new Queen of Rain Makers, she now sits on the thrown with a newly revived King of Flows: The S79. 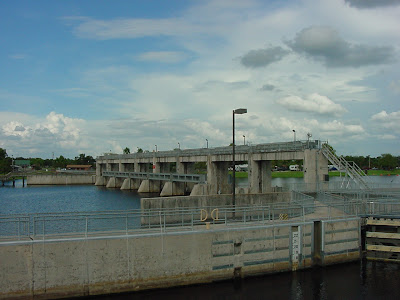 According to my calculations, the S79 recorded its highest week of flow ever: averaging 23,500 cfs for the week.

Keep in mind that none of the flow in the Caloosahatchee– or at least not much of it at this point in time – is from the Lake.

The flows we are currently seeing in the Caloosahatchee are what everyone in The Everglades Game calls “watershed flow” – flow that comes from the rain that falls on its watershed, not from an upstream source.

In the case of the S79, the watershed that contributes its rainfall is called the East Caloosahatchee Basin. 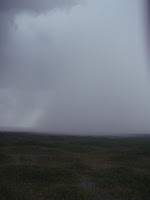 And the East Caloosahatchee Basin led the way with over 10 inches of rain for the 6-7 days that Fay was in town (or in Florida rather). That was just a tad higher than the +9 inches of weekly rain that Fay dropped on the Martin/St Lucie Basin. But with those sorts of eye popping numbers, an inch or two difference is really splitting hairs.

Call it a Big Rain Week!

.
Or alternatively, and almost, The Permanent Storm!

But regardless of “where” that water is coming from, mega-flows through The S79 is a big change in events from the past 2 years — especially last year, when flows barely materialized.

The bigger question on the horizon will be how long those flows will be sustained, and if and when the flood gates will be raised from a rising Lake Okeechobee.

And if the King of Flows will be dethroned by the Kissimmee’s S65E that feeds water into Lake Okeechobee. It averaged around 10,000 cfs for the week, as a result of the 8 inches of rain that Fay brought to the Kissimmee Valley. 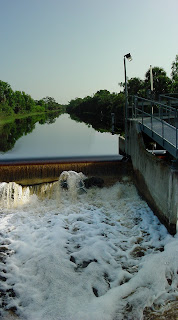 And the S79 may be the Coastal King, but the uprising from the other smaller tributaries and canals cannot be ignored, especially after a rainfall of Fay’s proportion.

That topic was discussed in a recent article in the Ft Myer’s News Press. Brackish waters can withstand a pulse fresh water … but only to a point, and only for so long. And the price to be paid doesn’t become apparent until months down the road. Not to mention that finally getting it right again can take years.

Fay caused colossal and instantaneous flows to the coast pretty much everywhere in Florida, not just the S79, and at a magnitude that is off the scale. I caught a glimpse of articles on rising waters underway in the Suwannee and Apalachicola Basins. I’m excited to see more of the data as it “flows” in.

But I’m also hearing chatter of a slower moving Great Slug of Fresh Water moving its way to the south here in the Everglades.

All the S12s are open, (as shown in photo above). And there just not open: the gates are pulled as high as they will go. The same can be said along The L28, where water is gushing through the S343s and S344. That hasn’t happened since 2005.

And further down in Big Cypress National Preserve water is cresting up to and – in spots – over Loop Road. Cartographers struggled at the time of it’s inception with whether to call it a “road” or a “river”: and truth be told it’s been a little of both over the decades.
More recently, Loop Road is the place where I spotted the Amazing Swamp Vortex. 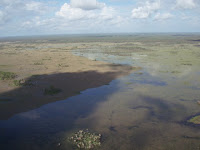 .
The freshwater wetting front in Big Cypress National Preserve has risen higher into the pinelands. It’s currently at a higher level than late August of 2005 and 1995, but 1995 didn’t get really high until September and October.

Fay brought instantaneous flows to the coast, and a slow moving slug of water to the south, and filled Florida water bodies everywhere up to the brim, (even over the brim as in the case of Loop Road).

But what has everyone everywhere crossing their fingers, with a pensive and watchful eye, is the September storms starting to brew down in the Tropics.

The next storm – if it comes, especially any time soon – could be “The Hare” that breaks the camel’s back!