I was in the local green grocer and was happy to see the sign that I’ve waited for all year:

“Honeybells: First of the season.”

Honeybells are my favorite orange – although in actuality they are not an orange at all –rather a Tangelo,

But regardless, they are the sweetest of south Florida’s citrus, and made all the sweeter by their short season.

Fresh Honeybell season only runs for a few weeks – reaching their peak toward the later half of January,

After that they’re gone (at least the fresh ones).

Arrival of the Honeybells also rings in the middle part of south Florida’s dry season:

It’s been 3 months of nearly no rain,

Dry by even dry season standards.

That can partly be explained by a subtle shift in the global winds:

We entered the dry season with the El Nino Southern Oscillation (ENSO) index in neutral gear. That had me prognosticating the chance at a deep freeze or two, events more likely to happen when the jet stream is not constrained by the prevailing forces of El Nino or La Nina.

But now that’s all apparently changed:

The ENSO is starting to dip back into La Nina mode.

That tends to give the south peninsula a drier than normal winter – thus explaining our sparse rainfall (even by winter standards) – and also influences on other parts of the country – such as the Olympic peninsula and the Midwest – in the form of colder and wetter winter weather.

If it stays around long enough, La Ninas also put an extra skip in the step of the Atlantic Hurricane season … but that’s looking way too far ahead.

On our immediate horizon is the second half of the dry season.

Wetland water levels have dropped a full foot since the high-water peak in early September, in the weeks following Fay.

Did you know that the Lake’s perimeter levee – as originally built in the 1930s – is about the same age as that the Honeybell hybrid?

It was invented in 1931 up in Orlando,
Just outside the northern most reaches of the Lake’s upstream Kissimmee watershed, which — if you didn’t know — gives the Lake about a quarter of its annual inflow.
So get them while you can,

If you are from Florida, you can find the crème of the crop along a roadside stand and farmers market near you …

Or in the case you are out of state, you can have them shipped up north for around $25 per dozen.

You won’t be disappointed! 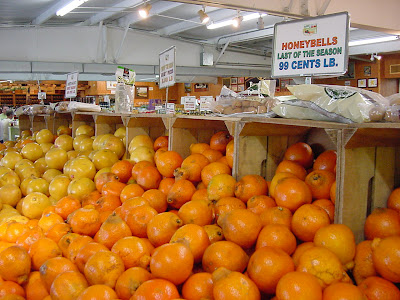