We live in a world of imaginary lines in the sand.

When it comes to national rainfall patterns the biggest line in the sand — or in this case, sky — is the hundredth meridian.

It runs through the Dakotas, Nebraska, Kansas, Oklahoma and Texas;

Meteorologically it corresponds to the Gulf of Mexico’s westernmost influence of moist air.

East of that line is the rainfall abundant east, with an annual average of 30 or more inches – with upwards of 50 inches falling in Florida and topping 60 along the Louisiana Gulf Coast. (This year the Ozarks in Arkansas tipped the charts with more.)

West of that line is the arid west, an area explorers originally coined the “Great American Desert,” but promoters tried to peddle as a irrigable promised land in which “rain would follow the plow.”

In practice, what we see today is “river water following the dams,” or rather, stacking up behind them.

Probably the most famous of the giant reservoirs out west is Lake Mead.

It averages 4 inches of rain per year, but holds 28 million acres of water when filled. Currently, it’s down around 100 feet – putting it at half capacity, which is still over three times Lake Okeechobee’s current volume.
Where does all that water come from?

The Colorado River delivers around 9 million acre feet to the reservoir each year, courtesy of snow melt from the Rocky Mountains.

Compare that to the 1 million acre feet that the Kissimmee fed into Lake Okeechobee this year, through the S65E, all from rain.

The west is also home to the wettest part of the nation: the Pacific Northwest,

where the Olympic and Sierra ranges ring moisture of the Aleutian lows flowing in off the Pacific, registering rain-forest worthy totals along their west slopes.

Despite it soggy reputation, Seattle lies in the eastward rain shadow of those giants. It has ubiquitous cloud cover – registering 200 cloudy days per year, but the city averages a pedestrian 40 inches of rain per year. 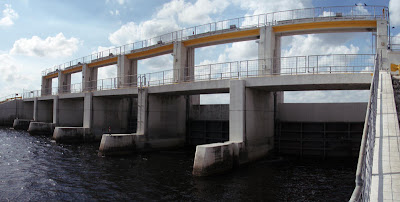 Compare that to south Florida’s only 100 cloudy day count, but beefy 55 inches of rain per year.

And keep in mind:

In summer, a good portion of its 100 cloudy days are probably sunny for their first half – through the morning – before the afternoon showers arrive.

And in winter, south Florida’s weather pattern is dominated by a Mediterranean monotony of one blue sky day after the other.

It’s a swamp land of bountiful annual rains, as shown below.

Which basks under the gaze of the sun’s perpetual shine – the so called “Sunshine State.”

That can be seen in the map below, which shows rainfall throughout the southeast since the start of the North American “water year” in October.

The new calendar year rings in the middle half of the dry season,

Or phrased differently, now the fire season is upon us.