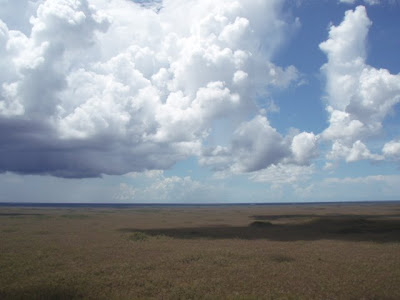 I come from the school of comparative hydrology.

What that means is that I see the Everglades through the lens of the watersheds, wetlands, and water cycle that I knew before landing in Florida.

And when I say “landing in Florida” that’s exactly what I mean.

.
I always say that there are three types of Floridians:

First there is the native Floridian. These Floridians know the state like the back of their hand and will tell you one story after another about the “Old Florida” of years gone by. These days they seem to get lost in the crowd of new comers, and you’d swear at times that they are more endangered than the Florida panther; but trust me, they are all over the place – you just have to know where to look: these Floridians love Florida for the paradise that was.

Then there is the seasonal Floridian. They semi-grew up in Florida, if not full time, then on a summer or winter basis of some sort either on family vacations or visiting a grandparent or aunt. (Doesn’t it seem that everyone has at least one relative in Florida?) That gave them a baseline of familiarity with Florida and a contempt for the cold and cloudy realms of the continent that they left behind: these Floridians love Florida for the paradise it is in comparison.

Then there is the “fell out of the sky” Floridian … and that is me. Not only did I never stepped foot in Florida prior landing a job in it, the state never really registered much on my mental map of how the country worked, especially peninsular Florida considering it was so far off the beaten track. These are the Floridians who love Florida for the paradise it is. .
.
But hydrologically speaking, the allure of the paradise is the puzzle of its paradoxes.

Case in point is the wrong-way clouds. For my first month on the job I kept trying to convince myself that the clouds weren’t moving from east to west. (Obviously it was a illusion being induced by over exposure to the heat and humidity). Those clouds just couldn’t be doing what I thought they were doing: everyone knows that clouds move from west to east across the North American continent, not vice versa.

Finally I worked up the nerve to ask someone. Unfortunately he was a “fell out of the sky” Floridian like myself: he didn’t know either.

Then I did what every good hydrologist does – I dug into my text books. That didn’t tell me either.

Finally, a native told me what was going on: it was the Trade Winds blowing off the Bermuda High.

.
Next came the mixed up seasons.

April showers bring May flowers, right? Not in peninsular Florida.

Fall is peak water season and spring isn’t so much renowned for its wildflowers as it is for its wildfires.
.
Again, I hit my text books on this one … but still no luck.

Eventually a “seasonal turned full time” Floridian filled me in on the secret: “You’ve got to think wet season and dry season in Florida.”

.
Next up was the prolific amounts of both clear sky and torrential rains. Could the two co-exist in such abundance, was such a paradox resolvable?

By this time I had sent my text books back up north.

That was my “welcome to hydrologic paradise” moment. 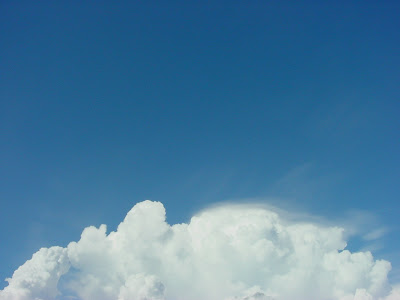