What looked like any other hill at first
(I was in search of a short cut back to Lontzen), 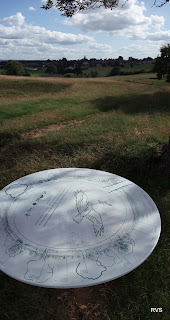 Turned out to be a Rosetta Stone instead:

A compass at its crest pointed – with arrows – in the direction of various points of interest along a 360° view of the rolling horizon.

One such arrow pointed to the Henri-ChapelleAmerican Cemetery and Memorial to which – the previous year – I had biked.

Talk about an uphill pedal for the ages!

I inched up a mountainous road in first gear (I would have gone lower if I could) for what seemed like a good half hour straight, but well worth the delayed gratification too:

(Although at one point I got lost and at another I sought refuge in a torrent of rain under the cover of a railroad bridge.)

Thus, a year later – from the vantage of that compass – I was not surprised to see it perched on the sweeping horizon’s most cloud-bound arc.

This, of course, is not the Everglades I am talking about
(despite Florida’s State Seal being on the monument in prominent display),

But rather Belgium instead.

Or to be more precise –
The hills where the “Battle of the Bulge” was fought.