Everyone knows about the cypress “going under” during the summer, and can point to the washed out ring around its trunk that shows the wet season water line.

But the true yardstick for measuring “peak water” out in the Big Cypress is not in how high the waters rises up its trunk, or how deep it submerges its knees, but how far deeply the swamp invades into the pineland high ground.
In other words, how high did the wetting front rise up into the “pine islands” and how long did it stay there.
Hydrologically, we have two types of pinelands in the preserve: hydric and mesic.
During a “typical” wet season, the hydric pines get flooded for around 2-3 months, and the mesic for only a few weeks.
.
It’s the mesic pinelands that we commonly think of as “pine islands.”
They are the only dry ground in town come the late summer high water season …
Sort of like Lilipution mountains of the swamps surrounded by a shallow sheet of flooded swamp. 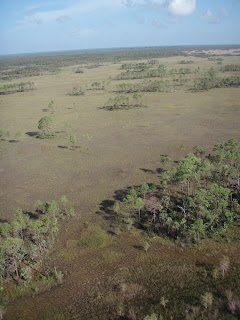 The pinelands are sprinkled all across the preserve in an intricate mosaic, some would say labyrinth, of swamp forest, cypress domes, marshes, and prairies.
During a “dry” wet season, the mesic pines stay completely high and dry, and won’t get wet at all.
But during a “really wet” wet season, you’ll see the hydric pines “go under” for the better part of the summer and fall …

And the mesic pines — the only dry ground in town — will dissolve into the growing gulf of freshwater rising from all sides.

.
How does this year compare?

It didn’t start as quickly out of the gate as 2005, and it’s not yet as high as 1995 or 1999, but its already made a name for itself in the history book oof wet seasons that were.
First came the unnamed storm that would later be called Cristobol, then came Fay, then Ike, and last week’s big rains over the southern Everglades.

Add them all together and you get high water.