Among Florida’s principle signs of spring:

Valencia Oranges are in season.

They are the “King of the Juicers,”
And by acreage too cover the most peninsular ground.

The name would imply that they hail from Spain.

They don’t – nor are they grown there much at all.

Instead they come way of California,

But aren’t grown there much anymore either.

Compare that to Honeybells:

The variety was Florida but its season has long passed (Jan-Feb). That’s why I was shocked to see them still in stock on the shelf! 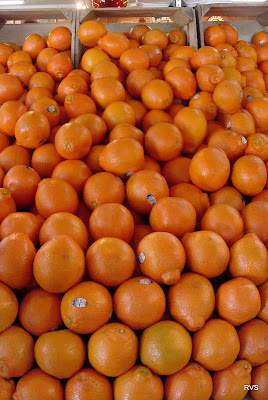 Was it a decrepit rotten bin? – Hardly!

Tarter, drier and with picture-perfect peels
No doubt dowsed with ethylene to “orange” them up:

These Honeybells were hauled in from California.

Florida’s Valencias are typically picked “green.” That’s not because they’re not ripe – They are.

Rather, spring time temperatures don’t oblige to turning them “orange” as their namesake would imply.

And so long as they are being juiced …