In the arid Old West there’s the legend of the “last man standing,”

But come dry season in the Everglades, the saying can more appropriately be rephrased as the search for the “last gate flowing.”

Along the Tamiami Trail that honor goes to the S-12D.

It’s the highest and longest flowing of the structures that deliver water to downstream Everglades National Park.

The A structure was closed “right out of the dry-season gate” in early November. And just last week the B was closed.

That leaves the C and D as the remaining two open, (not including water being transferred over to Northeast Shark River Slough via the S333 structure). 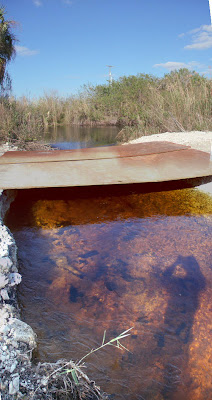 Due to high water in upstream Water Conservation Area 3A, the water district also cut an emergency breach across the old Tamiami Trail.
I went out there a couple weeks back to take a photo.

At their peak, the S-12s were delivering 4,000 cubic feet per second down into the Park for an annual total of around 800,000 acre feet. Estimates of flow through the breach were on the range of 100-200 cfs range.

That goes to show:
Sometimes flows can be just as much symbolic as they are supplemental.  And also add to the list experimental, much debated, sometimes controversial … the list goes on.
In its infancy, and even today, hydrology has always been a trial and error science.

Look no further than the Everglades: yesterday, today, and tomorrow.

Click here to view more Sky Watch images from around the world.