Florida is famous for its “sink hole” lakes.

Up north on the continent, once you cross glacial divide, you have similar looking lakes called kettle ponds.

They formed not from dissolving limestone (as do Florida’s sink holes), but from melting ice.

Retreating glaciers from the last ice age peppered the North Country with orphaned blocks of ice … and then “buried them alive” so to speak, (or rather, still in their frozen state) underneath the sandy sediments of the glacier’s ancient deltas.

As ice cubes do … over time, those giant blobs of ice melted:

That caused the land surface above to slowly slump into the shape of a hole, which –where it dropped below the water table – filled in with water to become a kettle pond.

There’s one pond in particular that stands out above all other kettles,

It’s neither the biggest, nor the deepest, nor is it remarkable in any other way (that I could visibly discern anyway from its banks), other than by the person who lived on its shores for two years long ago starting in 1847 … and wrote about it.

It lies on the outskirts of Concord Massachusetts: The man was Henry David Thoreau and the book “Walden” … also known as “Life in the Woods.” 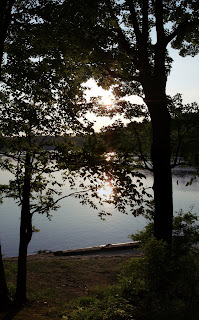 I have a copy on my book shelf at work which I haven’t read in years, but with summer vacation fast approaching, has me thinking its worthy of a re-read:

Yes, he was a philosopher, a naturalist, and a writer, an American great, and many other things besides, but and also – and so often overlooked: also a hydrologist …

Or at least that’s how it looked to me, from what I saw, standing on the shores of Walden Pond.