Mention of peak water makes me think of water rising “up high”, reaching up into the “high ground” of our hydric and mesic pinelands.
But “high water” also means our “lowest” waters – the strands and sloughs – are at their deepest … and flowing fast. 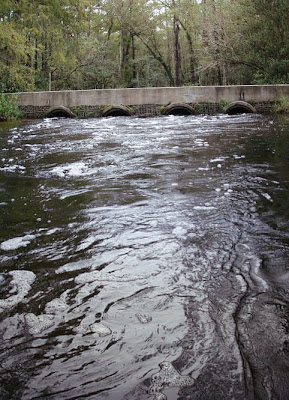 There’s no place in Big Cypress National Preserve where the swamp flows faster than Sweetwater Strand!

It’s down Loop Road about 5 miles south of Monroe Station, not far from the Tamiami Trail’s midpoint between Naples and Miami.

The truth is, Sweetwater and Loop Road are inseparable. Sweetwater wouldn’t be the gusher that it is if it didn’t have Loop Road to funnel water to it.

Now don’t get me wrong: Sweetwater would be flowing one way or the other, even without the help of the Loop. The strand is perfectly positioned to receive the waters that the Loop backs up behind it: Sweetwater is the lowest of the low spots along the 24 miles of Loop Road.

Turning back the clock 90 years (when my grandfather was 13 … although he never stepped foot in Florida), Loop had aspirations of being something bigger than the backwater it is today.

Way back then – it was the Woodrow Wilson era in the presidential office – community leaders in Monroe County were scrambling around in a frenzied bid to get their fair share of the cross-Everglades thoroughfare – dubbed the Tamiami Trail – to pass through the fledgling “mainland” portion of their county. (Monroe County is and always has been better known better known for its southern coastal half that includes the Florida Keys.) 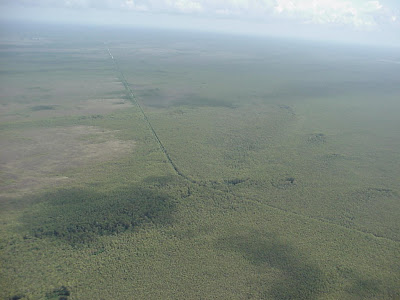 But when the road project floundered, and in stepped big city entrepreneur Barron Collier’s on the scene with a promise to rescue it, the deal was more or less sealed: Tamiami Trail would bypass around Monroe County, to the north, into newly named “Collier” County, formerly Lee Counties southern half.

Thus, Monroe County’s debutant stretch of swamp road, so close to being married into the Trail, was jilted at the alter and relegated to the backwaters it is today.

Sure, they eventually connected it to the Trial at both ends to make it a Loop, giving it it’s namesake.

But still, and even now, many of the people that drive the Loop will pause in reflection at some point along its path, and either think to themselves or say out load:

“Wow, there’s nothing along this road.”

Does that make Loop Road south Florida’s Road to Nowhere?

Loop patrons will also tell you (or anybody that will listen) that therein lies its charm:

Loop’s road to nowhere will get you somewhere. Perhaps most notably Sweetwater Strand, where the waters run deep, fast, and clear … and famously, during peak water, up over the road.

If the Loop made Sweetwater what it is today, Sweetwater returns the favor come “peak water.” It takes the Loop back to what it once was before:

.
Loop Road is currently under a travel advisory due to high water.
… the National Park Service (NPS) is … strongly discouraging travel along the roadway for all but local residents. If travel along the road is necessary, the use of high clearance vehicles is strongly suggested. This travelers advisory will only pertain to that twelve mile portion of the road maintained by the NPS, the portion of the road within Monroe County. Currently there is approximately seven to eight miles of the NPS roadway with four or more inches of water covering the road. The NPS is closely monitoring the situation and will lift the advisory when conditions warrant. 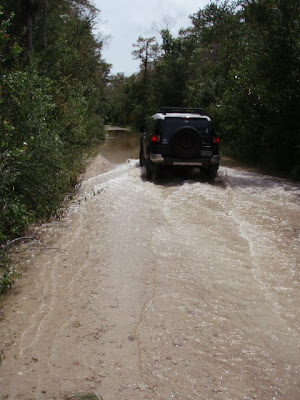