Where do plants and meteorology meet?

That would be the resurrection fern.

It’s an air plant, also known as an epiphyte, which means it attaches itself to another plant, and catches what water and nutrients it can directly from the sky or from the outer surface of its host plant.

But more than that, it’s a meteorological indicator. 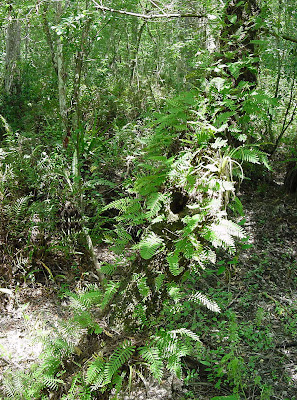 All brown and shriveled: that’s the resurrection ferns way of telling us the dry season is still here.

But don’t be fooled, they’re not dead.

All it takes is a splash of rain for them to unfurl dainty fronds of vivid green.

That’s the first sign that the wet season is here, and the swamps will be rising soon.

Now we’re getting ahead of ourselves.

The top photo is of the “shriveled up” variety, taken just last week in a pond apple swamp north of Alligator Alley.

The bottom one is from 10 months earlier along the boardwalk at Corkscrew Swamp Sanctuary in early June (… and you guessed it, just after the wet season had begun).