Tropical Storm Fay (in 2008) was the last time it happened,
Up on the Caloosahatchee at the S-79.

And only for a two week period. 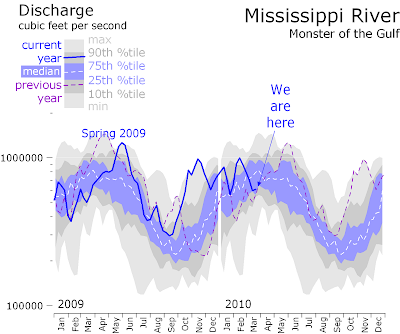 Before that in 2005 south Florida’s same big river
let loose at over 10,000 cfs for eight weeks over the summer and fall.

Its source, of course, was Lake Okeechobee …
Or at least a good chunk of it was.

But even so,
they are the exceptions, not the rule.

The Mississippi River by comparison
hasn’t touched below 100,000 cfs for the past 30 years.

That’s a lot of water into the gulf!

The past two years each topped 90 Lake Okeechobee volumes worth.