Have you ever had an answer right at the trail end of your thinking, only to get distracted, and then – having lost your train of thought – moved on to the next thing.

That happened to me in the mysterious case of the “misplaced water.” 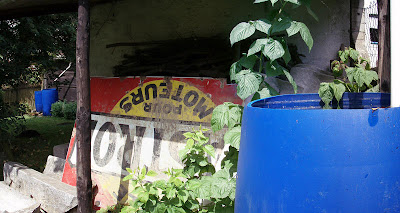 Rain had fallen “off and on” for several days straight in Belgium – rain barrels were all but filled up.

Some had even over flown their brims.

The next few days that followed did not bring much in the way of rain, but, it being cloudy and coolish, evaporation was not in play.

“Why then were the rain barrels drawn almost half way down?” 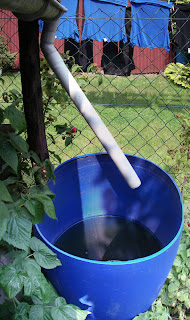 I carefully canvassed the area:

As water collected from the roof is “free” – I could gather no motive for anyone absconding away with it:

Nor were there any holes in the rain barrel either, and even more, all the fittings from the gutter to the spout seemed well connected.

I sat down in resignation next to the rain barrel, under the roof that supplied its water, in this case though, well protected in its shade from the steady rays of the late afternoon sun.

The answer was lurking … in the back end of my thinking … it was right there … I could feel it:

The sudden sensation of moisture brought me back to the moment.

I stood up and checked:
Yes, in fact, I had sat in water!

How could that be?

My curiosity was immediately quenched when I noticed, right beside me, a watering can: It had dripped water onto the cool stones, where it sat until I sat on it (and sponged it up).

I’d been sent out to the garden to pick a zucchini.

There’s nothing hard about finding a zucchini in Belgium: they grow as big as water melons (or so it seems) in Belgium … thanks to the ample daylight hours and fertile soil.

Kneeling down to cut it, I noticed the soil all around the plant was “suspiciously” moist.

“That’s strange,” I thought to myself – briefly reminded of my misplaced thought of the drawn down water – only to be distracted again when I cut it free and stood back up:

“How could one zucchini could be so heavy!” 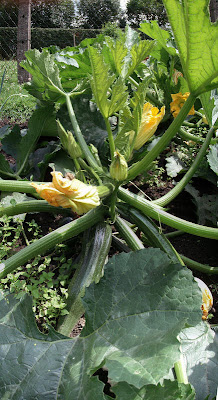 It was not quite the weight of a bowling ball, but definitely the heft of one of the ten pins.

“I’d call it a world record,” I thought to myself, “if there weren’t others in the garden, still growing, just like it, and the ones that were already picked … not to mention all the other vegetables down the row.”

I ambled my way back up towards the kitchen: