Case in point is the mysterious case of my vanishing waist line while on vacation in Belgium, despite the fact that – as far as I can tell – I’ve been eating nonstop.

My clothes are practically hanging off me it seems – as if I’d lost weight!

That’s more that novelty. The ingredients are fresher because everything is locally grown: small farms are everywhere you turn, gardens ubiquitous, and local bakeries and butcheries institutions.

That has me eating things I don’t normally eat … and lots of it: Bread, cheeses, chocolate, ice cream, an occasional Trappist-Monk brewed beer.

(Side note, but an important one: Ice cream stands are strangely more common and inarguable better in Belgium than Florida. You’d think that climates would dictate the opposite. The cherry on this sundae is that every Monday an ice-cream delivery truck stops by Oma’s house for a fresh delivery.) 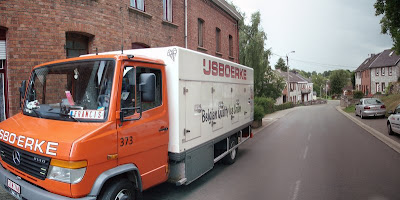 That brings me to Oma’s kitchen … or Super Oma as I call her.

I understand what attracted by wife to Florida – the sun-drenched warmth of its peninsular shores proved too intoxicating to her cloud-dampened Belgian soul: But in my heart of hearts the one thing I’ll never understand is how she managed to ever leave Oma’s kitchen.

It is a bounty beyond bounties –

A cornucopia which never stops flowing, of freshly-prepared food, often from the garden, always nourishing, and as if, when you sit at that table, the meal was customized specifically for you … even though there are a handful of others, each arriving at all times of the day, seemingly synchronized to the chimes of the bell tower, who feel the same.

Now back to the mystery –

“How on Earth has my waist line has SHRUNK since I’ve been in Belgium?”

While I’ve been bicycling on a regular basis, and I’ve done my fair share of walking – I’ve done no exercising by my traditional standards.

The numbers, quite simply, just didn’t add up.

“Some mysteries aren’t meant to be solved,” I reasoned, throwing my hands in the “air” in defeat. All I could come up with was that there must just be something different “in the air” here in Belgium. 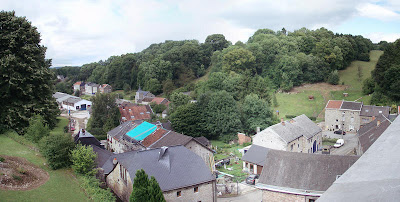 Days later I found myself eating yet again, this time a childhood friends of my wife for tea-time (but which would be more aptly described as “cake and pie” time … as no tea was consumed … at least by me), when I ran across a foot scale on the back porch, under an awning.

It was an odd place for a scale, but I didn’t ask any questions:

I stood on it instinctively and awaited “the number” … pensively.

To my shock – “it couldn’t possibly be true!” – I weighed half of what I was when I left Florida. A moment of anxiety gave way to realization – “The reading was in kilograms, not pounds.”

I quickly converted into Florida units, but the mystery only deepened. I wasn’t lighter (as the loose pants would indicate) nor was I heavier (as my Belgium enhanced eating routines would suggest).

I was the exact same weight that I’d always been! 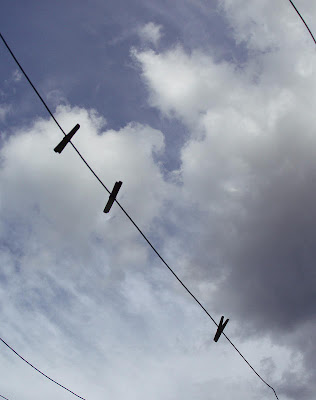 In bewilderment, I scanned across the farm field behind their yard, when in the distance I spotted linens and towels on a clothesline blowing in the breeze.

“That’s it” I exclaimed (under my breath) to myself, in silent exuberation: “My clothes are being ‘air dried’ here in Belgium on a clothesline – not in a machine.”

“That means they don’t SHRINK!” 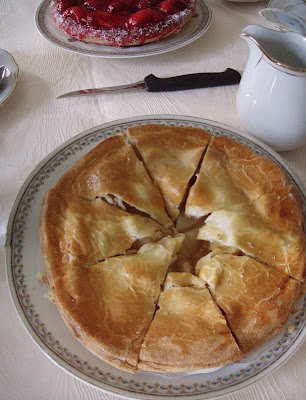 Finally, and with relief:
The mystery was solved!

In retrospect, I could see it all very clearly. All the clues were starring me in the face from the beginning: Yes, there was “something in the air,” only I couldn’t see it, because it was evaporation which is invisible; and yes, the “numbers didn’t add up,” but that was only because I didn’t have any numbers to go on.

Once I hopped on the scale (and got my numbers) then saw evaporation in action on the clothesline, the answer clicked in my head..

There was no better way to celebrate than with a piece of pie.