How can the deepest spot in the Everglades be at a record low,

But historically speaking – if you go back decades – also be pretty deep?

Call it the mystery of the Moving Hydrologic Baseline.

As their name would suggest, the Water Conservation Areas were designed in the 1950s to “conserve” water. In southern WCA 3A, that general concept – plus limitations on how and when water can be delivered into downstream Everglades National Park – has resulted in the Everglades biggest pool.

Currently the sloughs north of the levee (in 3A) are around 2.5 ft deep.

That’s extreme high water for any other part of the glades or adjacent Big Cypress Swamp … even during the heart of the wet season,

But it’s a full foot lower than the same time last year,

And 9 inches below the long-term median for mid November. 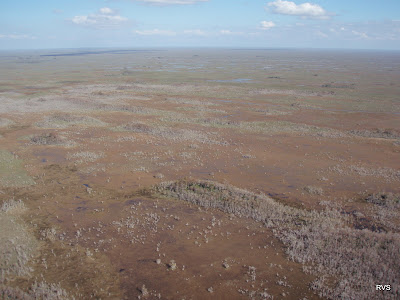 The big shocker – in contemporary times anyhow – is that current water levels have inched below where it was at the same point in November 2007.

That was the so-called Year without a Wet Season.

This year we did have a wet season:

It started early in May, but also ended early – and abruptly – in October … and it hasn’t rained since. A dry October is relatively common in southwest Florida (baring tropical systems) making it our opening month of the dry season.

By contrast, October tends to stay rainy across the pond in Miami, and thus is traditionally clustered as a wet season month …

Just not this year.

But don’t be fooled by a hydrograph!

Just a few hundred feet across the levee (as the wading bird flies), sloughs in Everglades National Park are half as deep, and don’t forget that 3A is still the deepest spot you’ll find anywhere in the glades …

And not just this year:

If your rewind the hydrologic clock back through the decades, this year’s current stage may scrape the bottom of the twenty-year hydrograph, but it’s smack dab in the middle of the normal line for the 1970s and 1980s.

This decade and last, 3A has been running a half foot higher than the previous two.

The twist is land subsidence.

The topography of the glades has been slow-motion sliced away at by fire, farming, and over drying – most drastically in the sawgrass plain south of Lake Okeechobee (where land surface has sunk over ten feet from the primordial “Pre-Drainage” condition,

But also in virtually every other corner of the remnant glades (baring possibly Loxahatchee) on the order of at least a foot or two … sometimes more.

Thus, the fuller reason on why the Conservation Areas levees were built was, yes, to conserve water, but also to preserve the peat by keeping them hydrated …

And preventing them from vanishing (i.e., burning) into thin air.

If it were possible to rewind the clock back two centuries into Pre Drainage,

Today’s current water stage would be very close to how high the land was then, prior to subsidence.

My point is that baselines move in ways that are hard to fathom in the present, fantastical to try to recollect the past, and fairly certain to change in the future.

About the only certainty there is in the Everglades is “change” … through the seasons, decadal cycles, and centuries.

We wish we had some of that “change” back, but that’s water under the bridge at this point.

The change we need are the waters that lie ahead …