You may have caught the news:

Scientists are predicting a record-setting “dead zone” in the Gulf of Mexico this summer.

How big you may ask?

They won’t know for sure until July, but probably somewhere in the neighborhood of 8,000 square miles, or – as has been touted in the electronic media outlets – “roughly the size of New Jersey.”

Actually two things do: First is the “dead zone” – our Gulf Stream waters should be getting cleaner (not worse) – that’s a given; But second, why drag New Jersey into the mess?

Not only is it not a Gulf Coast state, nor is it even in the Mississippi watershed, it’s not even a water body! 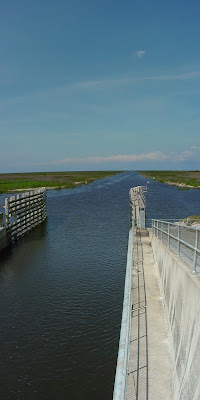 Lake Erie is the shoe that “almost fits.”

At 9,940 square miles it is a tad bigger than the projected area of low oxygen, but isn’t it appropriate in this case to buy a shoe that leaves a little room for growing?

The real culprit of course has nothing to do with New Jersey, or Mississippi for that matter (as in “the state”) … and not even with the river, but rather the watershed:

It feeds the river (with high flows and nutrients), which spills into the gulf, which fuel the algal blooms, which steal away the oxygen.

I say that we “Gulf Coast and Mississippi Valley” citizens take the matter into our own hands.

Let’s start by comparing the “dead zone” to something on our own turf, such as our locally-available “Okeechobee” measuring cup.

By my calculations this year’s hypoxic waters will span an area 12 times the area of Lake Okeechobee.

How big is the Mississippi?

The river crested at 1,000,000 cfs earlier this June, or in “Lake Okeechobee” terms, enough to fill the lake from bottom to top in 2.5 days.

That’s one big river, but I was thinking of the watershed … which is where the problem lies: