The official “calendar” conclusion to the 2008 hurricane season still has two weeks to go, but “meteorologically” the sky has already moved on.

And it was an active year.

But not because of Fay.

.
Florida ducked most of the high powered storms (in terms of wind and wake), and there were a-plenty this season: 2008 ranked as one of the most active storm season of the past 65 years.

Famously, the 2008 season recorded the first-ever five month consecutive steak – from July to November – in which major hurricanes (3 or above) rose out of the Tropics.

Our last one – officially named Paloma … but more largely known in the industry as a “November Surprise” – rose out of the ashes of the Caribbean well after the African Monsoon’s had come to an end earlier in October.

Those monsoons are the breeding ground for the hurricane season’s most feared storms: the Cape Verde giants. 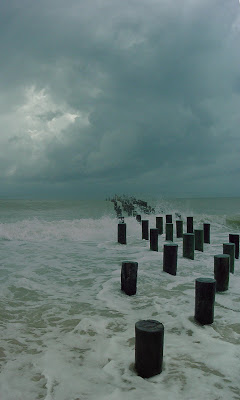 .
But who said the party was over just because the Cape Verde’s leave early?
.
That’s where the November Surprises come in.

They get their name because they tend to form quickly, and are closer to land when they do so.

Interestingly, Paloma spun to life with the help of the recent cold front that blew cold air across the Florida peninsula from the continent above.

That cold air didn’t stop, it kept going … and in doing so it “do-see-do-ed” (bow to your partner) the tropics to life for one last dance.

.
And what’s the saying: “Save your best dance for last?”
(Actually I don’t think that is a saying.)

But none the less Paloma did just that, and more.

By cranking up its volume all the way to a Category 4, Paloma put a surprising end to a month that is used to its “November Surprises.”

.
Remember, it won’t be official until November 30th.

However, this the one point in the meteorlogical party we call the 2008 Hurricane Season that we can breathe a sigh of relief … and rejoice:

The music from the tropics has finally gone quiet.