This wet season confronted us with a classic conundrum:

What makes a wet season?
Is it one big rain or many little ones?

.
This year would seem to weight heavily in favor of the former, thanks to the mid August arrival of Fay.

But Fay wasn’t evenly spread throughout south Florida – it went heavy on the Lake and St Lucie, with 8 and 10 inches of rain, respectively. It only dumped half that amount down south on Miami.

As much rain as we got from Fay, it could have been worse.

Fay dropped 20 inches upstate on the the St Johns River and Apalachicola basins. Similar amounts over the Lake would have been a game changer.

That was particularly the case “upstate” north of the Lake.

But down south Fay’s waters were already moving south and piling up in the Everglades.

That’s where the double whammy of many little rains came into play.

A steady stream of early October showers on the southeast coast (including the foot of October rain that fell on Key West) was just enough to push the Everglades up the brink of its levied banks.

Those levels never climbed as high as 1995 or 1999 thanks to an extended dry streak at the end of October.

.
In summary,
and to answer the question:

It’s a combination of the big rains and the many little ones that sustain the summer water cycle.

Fay needed a little help from its friends. 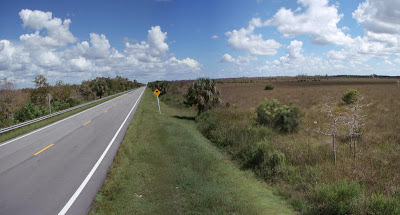