Someone famous once said:
“You can’t be a hero in your home town.”

I’m not sure who that was – so maybe he wasn’t that famous after all,

But I am fairly certain that whoever penned it did it with one foot in whatever land they had landed in (and found some success) and the other firmly rooted in the reality of the land they came. 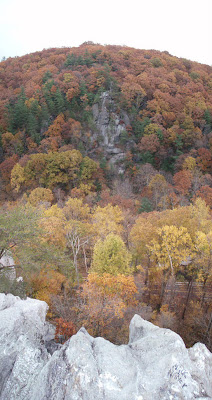 We always hear that America is a landscape in change and a population on the move, but no matter how much one reinvents oneself on the Great American Frontier, there is no place on earth more sweet to the sent or familiar to road-wearied eyes than the green grass of home.

Or in my case, it’s fall colors.

I had the good fortune to revisit my home turf – and area that I affectionately refer to as “The Mudderland” – in peak leaf season.

But don’t look for “Mudderland” on the map, because you won’t find it.
.

What you’ll find instead is the rolling rural hills of the Piedmont Plateau region of Harford and Baltimore County Maryland.

All my ancestors hail from Baltimore Harbor.

.They floated in by boat some 150 years ago, but the terrain that I am most familiar with, which I consider the “heart of the Mudderland,” is the northern half of Harford County.

It’s a tailwater tributary to the Chesapeake Bay’s main source of freshwater – the Susquehanna River, and the first water way that I literally and figuratively “got my feet wet in” as the thought-of-a-hydrologist that I would become.

There’s a remote reach of that creek, up far in its headwaters, tangled deeply in the Mudderland’s central core, which I consider the baptismal font from which my inspiration and aspiration as a hydrologist flows forth. 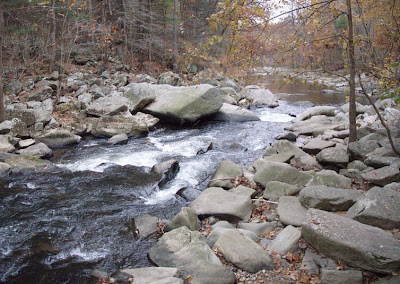 It’s called “Rocks,” more properly known as “Rocks State Park” and one of the many gems in the Maryland State Parks system.

I was first introduced to it as a place all its own, unconnected to anything else.

Only later would I learn it to be part of Deer Creek … and still later an even smaller part of the Mighty Susquehanna’s watershed.
.

They inspire in spots, even before an understanding of their place in the interconnected whole of the watershed is revealed.

It’s most famous spot is the scenic (and rocky) run of rapids where the river passes through the King and Queen Seat. The King is the rock outcrop on the one side of the ridge, and the Queen the other.

The creek runs in between, in a torrent of white water which roars through a jumble of rocks that – years removed – I still know as well as the back of my hand.

.
King and Queen Seat is the pinnacle of the Mudderland, and the meditation rock you sit on … to listen to the creek below … and scan across the watershed that it washes through.

As a hydrologist now 20 years removed from the “Source of the Mudderland,” it was good to put my feet out on the rocky cushion of its royal seat,

And see down below that water still flowing. 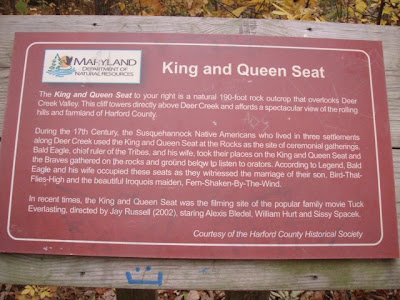