Climbing a mountain is an endeavor that perhaps like no other gives us the iron clad satisfaction – after hours of arduous hiking, onward and upward – that we finally and for certain, and with a funny mix of exhaustion and euphoria can say, with a big sigh of relief:

But in other arenas, it is famously difficult to predict “peaks” in the moment and time that they unfold at the event horizon.

There’s no better example than the water cycle,

Half of all storms to make Florida landfall – at hurricane strength – occur in the months of September and October.

The arrival of October often gives us the illusion that the “wet season” has come to an end, and yes it is true: the signature storm – the Enhanced Sea Breeze – more or less breathes its last sigh sometime in the first half of October, (a moment that approximately coincides with night-time air temperatures dipping into the upper 60ºs F).

But Floridian’s do not breath their last sigh of relief until the calendar page is safely turned toward the later part of November. (The Tropics continue to spin up trouble in the Gulf and Caribbean quadrants, long after the North Atlantic Cape Verde’s have mothballed their operation for the winter)

So to answer the original question: Have we arrived at “peak water” season?

Water levels have crested in many areas in the weeks that have followed Fay. And many coastal water ways that were once gushing with water have gone silent, or have become a trickle of their post-Fay selves.

Conversely, the Lake continues to rise, as are water levels in parts of the Water Conservation Areas, and discharges through the S12s – fully opened for weeks now – also continue to increase.

But the nature of sheetflow is not singularly measured in how high the sheet rises, but probably more importantly in how long the sheet stays and flows at its elevated state.

Water can rise startling fast in flat Florida – as so vividly demonstrated from Fay. It’s drop, on the other hand, is like watching molasses flow downhill in winter. (That’s not the best analogy for Florida, but you know what I mean.)

How long the wetlands remain wet into the dry season is a factor of both the peak’s height and how late the peak occurs in the wet season.

We saw that in 2005 in Big Cypress National Preserve when the “sheetflow season” sprinted early out of the gate with a 20 inch June rainfall total and ended with a late-season exclamation point from Wilma.

And we saw it in 1995 when the “whole year” was especially wet, they so called “year without a dry season.”

So in general terms, yes we are at “peak” water season, but it may still rise higher and may persist in the neighborhood of its current elevated state, (even if only down a notch), before it begins its gradual decline into the dry season, presumably sometime later in September or October (or even November depending on the how the storms track). 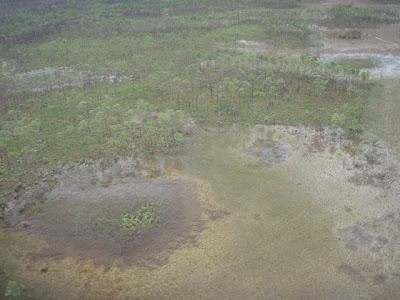 Compare that to the uncertainty baffling global energy markets about whether we’ve entered the era of “peak” oil production. The “peak oil” theorists claim that the world-wide extraction of oil has crested at its current 85 million barrels per day production rate, from which global extraction rates will gradually decline in the decades to come.

So what is 85 million barrels per day in more tangible terms?

That converts into tidy hydrologic units of 5,600 cubic feet per second (cfs), and (over 365 days) 4 million acre feet per year.

Funny coincidence: 4 million acre feet is exactly how much water Lake Okeechobee holds at its current elevation of 15 ft above sea level!

And the current inflow from the Kissimmee is around 6,500 cubic feet per second, close to, but a little higher than the daily rate that oil is extracted from the ground.

Who would have thought Lake Okeechobee would be such a convenient measuring cup for better understanding global energy markets?

So to summarize, and to answer the original question.

The volume of water in the Lake at its current elevation of 15 ft above sea level – (around 4 million acre feet) – is equivalent to the annual volume of oil produced world-wide at its current extraction rate of 85 million barrels per day, a rate considered by many to be “peak” oil, but which in all likelihood for the Lake does not correspond to this year’s “peak” water, especially considering we’ve just now passed the dubious milestone of “peak” hurricane season (at least historically speaking): with its second half still to go.