Trips down Loop Road are few and far between,

Flights above are even rarer.

Here’s a view of that road and its main hamlet — Pinecrest — from the sky.

The back story on the 8-mile eastern spur of this lime rock road is that Monroe County had aspirations of it becoming part of the Tamiami Trail.

At least that was the plan in 1915 when the idea of the road was conceived.

By the 1920 work on the project had stalled:

In stepped Barron Collier – an advertising mogul (railways placards, not internet ads!) who found riches in New York City – to pick up the pieces:

As largest landowner in the region – he had accumulated 900 thousand acres (larger than the modern day Big Cypress Nat’l Preserve) in the hey day of his Florida operations – he had a vested interested in getting economic activity up and rolling in the swamp.

His plan detoured the Trail to the north, away from Pinecrest, straight from Dade into eponymously-named Collier County instead.

That left Monroe County – and its unofficial “inland” capital – off the main drag.

I say “inland” because Monroe County is better known for its Florida Keys, not its thin sliver of mainland glades and swamp. 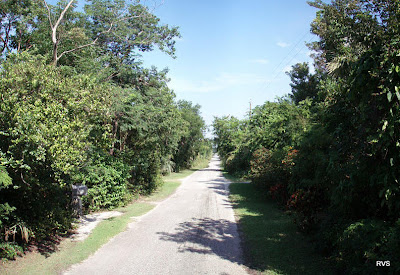 The road to Pinecrest wouldn’t remain a “spur to nowhere” for long:

It was extended deep into the swamp an additional 18 miles instead, until it eventually got “somewhere” – which was right back to where it started: the Tamiami Trail (aren’t journey’s like that!),

But at a an aptly named new spot called “Monroe” Station.

Today we call that 25 miles of lime rock Loop Road,

Many have noted that “loop” is “pool” spelled backwards,

That’s fitting – it has a storied history of flooding during high water years.

Or in other words:

There’s a lot of water “over” that road.