Here’s an updated graph showing daily high and low temperatures in Naples, Florida since the start of October.

Do you see what I see!

That’s right, we’ve reached the point in the year that Naples “average daily low temperature” dips below 60º F. (Look on the “dark gray” band on the far right hand side of the graph).

What does that mean?

At least according to Winsberg’s Florida Weather it has.

.
If you are a weather nut like myself, this is one book you are going to want to have in ready reach on your bookshelf, and one with lots of dog ears and sticky notes in the columns.

Where others wiggle and waffle, Winsberg assigned numbers, absolutes, and guidelines.

More than any other book I’ve read, has given me a foothold in the squishy weather world of the 27th state.

One of my favorites, and a fun one to track, is the arrival of fall as it “chugs” its way down the peninsula.

.
.
You can hitch a ride on Florida’s “fall temperature train” starting in mid October upstate in Tallahassee. From there it’s a scenic trip south through hilly spring and citrus country of the Ocala Arch. Five weeks after “hopping” that train in Tallahassee, you can hear its whistle blow at Naples Depot. 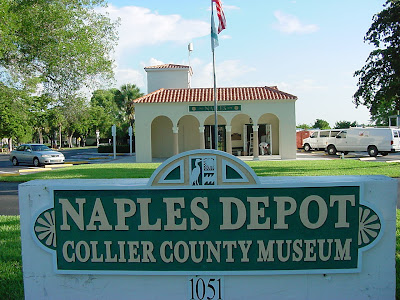 From there it’s off on a two week adventure across the Everglades on its way to Miami.
.
.

If you were hoping for a scenic trip down the keys on Flagler’s Rail …
.
I’m saddened to tell you that Miami is the final stop of the “Florida Fall Train.”
..
Average daily low temperatures on Key West never drop below 60º F.
.
You’ll have to ride the rail of a Polar Express if you want to see temperatures drop below 60º F in Key West.

That rail doesn’t run on a regular schedule.