The bookshelf is where we retreat to, yes, relax with a good tome in our hand, but also to dig a little deeper into water. Our bookshelf is coffee table friendly, too. Challenge yourself to 15-minutes a day with your bookshelf and watch the dividends pay off. | Water Writings | Easy Trivia | Watersh-editorials | Dictionary | Bookshelf | aquatic-quandaries | Swamp rules | Tales of the water cycle | Ghosts of watersheds past | Watershed myths | Before and after | Speaking Water | Measuring Water | Fireside Water

These reports and books are must-haves for your bookshelf

You’re reports are so chock full of photos and diagrams, and pepper with prose that is easy to digest – can I print them out and display them on my coffee table?

Absolutely! And actually, they were formatted and written with exactly that in mind. Long ago in a land far away, before I even stepped foot in the swamp, I attended a scientific conference on an important topic for the locale I was living at the time (Hint: It rhymes with Cape Cod). While the session went well enough, at its conclusion an epiphany struck:

Why present such an important topic to a group of professionals a half a world away when the local watershed is full of people that would be better served to hear the message. And why wait months (even years) to collate the information in with obtuse terms and hard-to-read jargon when speaking in plain language can reach a larger audience?

Many moons later a hydrologist that I very much respect said, “- Bob, your the people’s hydrologist.” And so be it. I’ll never publish in Hydrgeologica (or whatever the scientific journals are called), but I can get information out in a format that the local folks, both aquatic professionals and lay enthusiasts, can equally enjoy.

Please print out and put the report on your coffee-table, bookshelf, or wherever works best for you. Oh, and if you see a mistake, let me know. My reports are as much a milestone as a work in progress. My philosophy: Share early and often. We’re in this together and hopefully these reports help support our collective cause of keeping the conversation rolling.

When it comes to geology …

It may be last on the swamp check off list.

By check off list, I mean what tourists come to see — with alligators being at the top. I’ve heard it said that some four out of five people visit to the swamp to see an alligator. As interesting as they are to see, they are oddly not present in the geology of the swamp. Even odder, as old as the alligators would have you believe the place to be, the swamp ecosystem is actually quite young, just a few thousand years old. Native American tribes inhabited Florida before the Everglades or the Big Cypress swamp existing. So there are no alligator bones in the geology, it’s all marine limestone, about 3 miles worth underlying the swamp with the upper 50-100 feet forming the Gray Limestone Aquifer. Unlike the Biscayne Aquifer to the east, the Graystone Aquifer isn’t as permeable nor as intensely pumped. With regard to the later, I think that alligators are happy about that.

This report is 20 years old, but still relevant

But did you know the addition act — as authorized by Congress in 1988 and officially happened in 1996 — also included a one mile strip on the western side of the Preserve? The purpose: It better aligned the swamp preserve to hug up against State Road 29. That anchored it to better and more obvious jurisdictional landmarks. A road is easier to see than an invisible dotted line through the trees. That being said, even though the road sounds easier, the official boundary weaves in and out of the canal, and in one place the Preserve even owns the canal outright. But that’s a detail. My larger point is this: Sometimes called the Western Strip, over time it’s morphed into our collective imagination as always being part of the original preserve whereas the term “Addition Lands” has been applied in modern times to just mean the Northeast corner of the swamp preserve. Funny how terms and meanings change over time.

As for the report, I think it withstands the test of time. I wrote it to highlight that unlike the original preserve, the Addition Lands — both the Western Strip and the Northeast Corner — are more directly impacted by upstream water management practices and infrastructure external to the Preserve. Fast forward 20 years later, WERP and SR29 Road Widening prove the point.

Happy reading now, or for a good reference for later!

The swamp is more than …

Report on the history of flood and fire in the swamp

It’s more properly understood as being a “flood and fire adapted” ecosystem. Every square inch of flora and fauna depends on some goldilocks dosage and return interval of flood and fire. Or in other words, so goes flood and fire, so goes the swamp. Well, easier said than done. The truth is that both are blunt tool instruments that have a time lag of ecological responses, some of which we see happening in months or years, and others that take decades to unfold. The thing about the swamp: It’s malleable, too. Destroyers in other landscapes, flood and fire are a swamp’s best friend. This report discusses the history of water and fire management in Big Cypress National Preserve, how it’s changed over time and other factors that weave into the fire-water mix.

More about the report: I tried to make it coffee table friendly. I always say, “there’s nothing more complicated than water in the swamp, with the exception of fire. But somehow by combining the two we simplify the math.”

There’s other books out there …

But for me Tom Lodge’s book is the best.

Why? For one, it passes my number one test: It’s highly rereadable. By rereadable, I mean that I read it over and over again. Partly because the material is so good, and rather technical in nature — thus it takes multiple reads to fully digest, but Tom also knows how to turn a sentence. More than just a scholarly accomplishment — and that it very much is, this book is a literary masterpiece. The sentences and the words he uses are just fun, and thought-provoking, to read. The introductory section to the Big Cypress alone is chock full of little anecdotes and diatribes on how the region got its name. Another reason I love it is that he chronicles how the book evolved with each new edition, including his sessions with the Marjory Stoneman Douglas. This book brings the Everglades to life, both the ecosystem and the scope of what it takes for a person to understand the place. Spoiler alert: I am a bit partial because I have a signed copy. But the truth is I actually have two copies of his book: One at work and one at home. Whenever I get a spare fifteen minutes, I love picking it up and digging in. I find something new each time. This books a rereadable and a “must have” for any book shelf. Notice in the video how I prominently feature it on the middle shelf.

But it was timely.

This report dates back to Fall 2019

The moment I caught word that road planners were looking into widening State Road 29, I dove into the literature looking for the definite guide to the road and the canal. Finding none, I got to work writing everything I knew. Three years later the road still isn’t widened and a multi-agency team is looking into drainage issues in and surrounding Immokalee. Water projects never get done in a hurry. But in this case I’m glad I rushed to get the draft report out. Come to think of it, timing might be right to give it an update. My philosophy: Get as much information out as early and often as possible, and always make it a point to loop back around. That being said, the next big step is figuring out how to quit the chitter chatter and actually get the Big Water Fix off the ground.

Land from the Sea

Prelude to a Plan 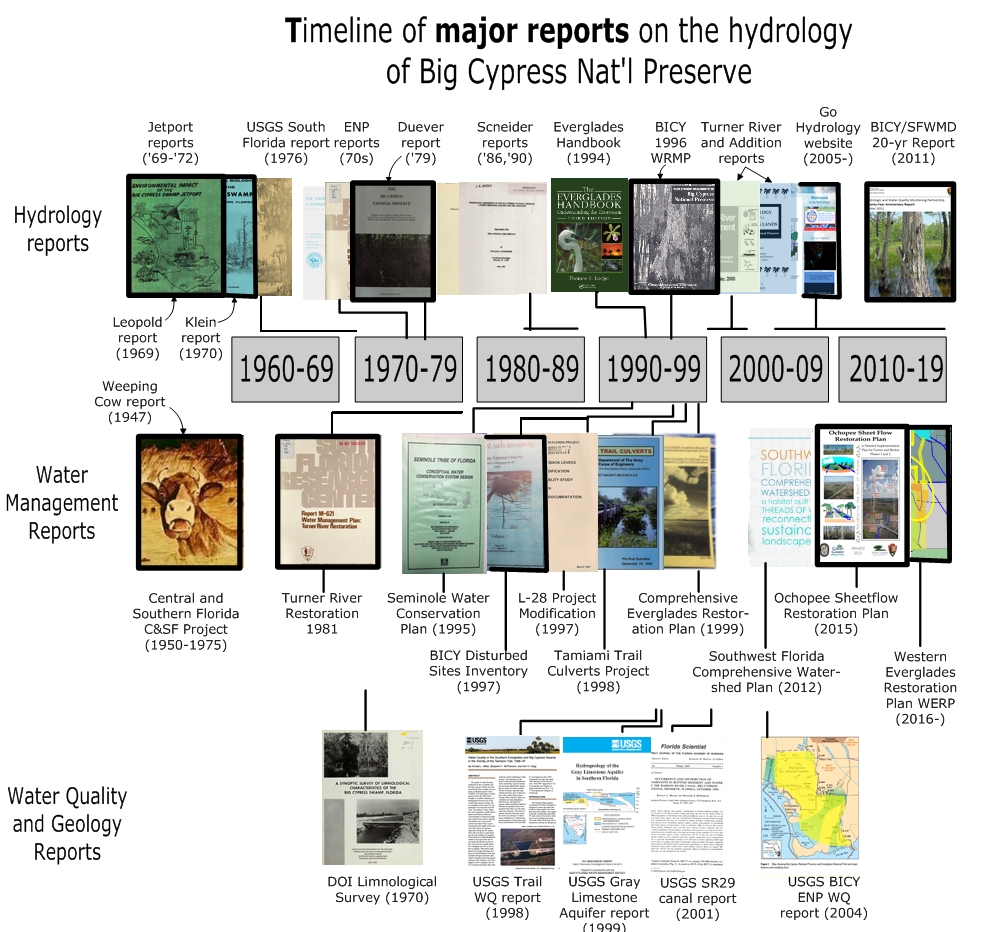