Whenever I put up the shutters — or “shields” as our 6 year old son calls them — and so long as the electricity stays on, so the air doesn’t quite running: I end up sleeping like a zombie.
.
We have the old style aluminum baffle variety of storm shutters, which do a great job of protecting the house from errant wind-blown tree branches and roof tiles, but which completely block out any sunlight from shining in from outside.
Suffice it to say the same 6 year old son was jostling me awake in the morning trying to tell me that “its way late in the morning, it’s time to get up.”
No it wasn’t Christmas,
.
But we did have something as good in our front yard, at least in the mind of a 6-year old boy: a gargantuan street and yard-engulfing puddle!
That being said, I heard the storm aplenty through the night.

.
Lots of wind, but mostly rain, and upon opening the front door we were greated by a giant palm frond from a neighbors royal palm.
Could it have broken a window had the shutters not been there?
I’d like to say yes, just because the calculated savings of not having to fix that window, can now be used as rationalization to spend the money on something else.
Beyond the front door, out in a giant-puddle shortened front yard, we were estatic to discover that we owned a “water front” home.
.
(That had always been a dream of ours).
.
But somehow I don’t see that as adding value to our home, or being a selling point in the chance that we try to sell it … something along the lines of:
“Old style Florida home, with pool, 3 bed/ 2 baths, waterfront after heavy rains.” 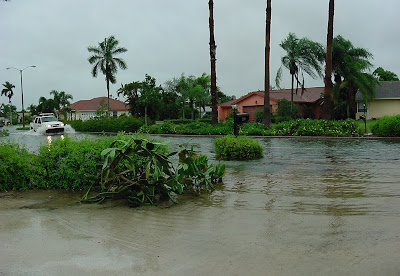 Joking aside, Fay could very well go down in the history books when its all said and done.
.
The key point here is that Fay is not done, … not by a long sight.
Not as powerful as Charley or Wilma, Fay has the hallmark of every great rainmaker: a lack of speed.
.
The most recent word is that Fay has completely stalled somewhere not too far from the Lake. Truth be told, I was in complete shock when turning on the TV around 3 pm to see the eye of the storm was right around Labelle.
Meteorologists have also been amazed how Fay has sustained (and even gained) strength since it made landfall. Of course, the interiors of the southern pensinula is as just as much water as it is land, not to mention that the outskirts of the storm can still pick up moisture from the coast.
.
When its all said and done Fay also may make 3 separate landfalls in Florida. Fay also has a chance to make a rare landfall in Georgia if it steers a little more to the north on its predicted U-Turn. Landfalls along the Georgia coast are relatively rare.
They are saying 15 inch totals may not be uncommon for the Vero Melborne area, and from all indications the Kissimmee has (and still is) receiving a thorough drenching, as well as the Lake.
I don’t have the “hard numbers” yet, but here’s the most recent radar-derived rainfall totals from the SFWMD’s raingage radar, for the past 24 hours.