Ever wonder how our nation’s waters get their name?

It twists and turns for 9 meandering miles from the swampy forests of Big Cypress Nat’l Preserve the mangrove lined backwater shallows of Ten Thousand Islands. (Actually it’s only around a thousand islands, but that’s a different story.)

But by normal “river” standards, it’s barely budges the needle on the “stream worthy” barometer. 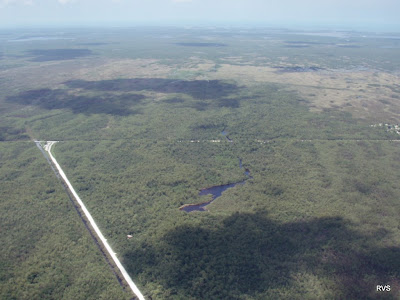 It’s been designated a “creek” despite the fact that it quadruples Turner River’s annual output (74 Empire State Buildings per year) and is almost 6 times as long (52 miles).

All I can figure out is that Fisheating Creek gets penalized because it drains into a freshwater lake (Lake Okeechobee), not to saltwater tide like Turner River.

Now upstate Suwannee River is a waterway that lives up to its “river” designation!

It’s 266 miles long, and here’s the eye popper – on average it fills up 1 Empire State Building sized tumbler per hour! Or in more Florida friendly units, it fills up Lake Okeechobee from bottom to base (of its perimeter levee) – that’s 4.4 million acre feet – over the course of a year.

Did I mention the Suwannee River also flows to saltwater tide?

That’s about the only thing it and the ephemeral “creek” down in eastern Collier Country called Turner River have in common.

On the other hand, it’s about as big a natural water channel you’ll find south of Lake Okeechobee.

By Everglades standards, that makes it “river” worthy.

For calculation purposes I used the top roof at 1250 feet, not the uppermost point of the antenna/spire (1472 ft).