Newcomers famously point out the cypress domes as the probable “high ground,” especially when flying across the Big Cypress Swamp from the air, because they literally look like rolling hills.
That’s a funny illusion because the cypress domes are actually where water is deepest, and stays wet the longest.
It’s the slash pine where the ground is highest (and driest). 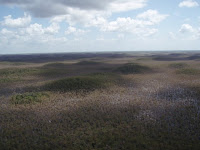 But during the summer, it can be tricky to differentiate the patches of pine from the meanders of cypress. That’s understandable considering how much they are often mixed up in a crazy quilt of vegetation that we call “the mosaic.”
The good news is that Fall is right around the corner!
That means the cypress needles will start to turn brown and fall. The pines — living up to their name — will stay their tell-tale “ever-green.” 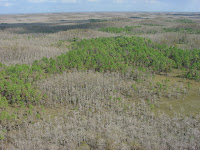 That makes Fall and Winter a great time to fly over the preserve: the flow systems really “hop out” … its almost like you are wearing special “sheetflow detection” goggles.
In the meanwhile, here’s a map color coded that shows the Liliputian valleys and mountains of the preserve.
Among the deepest swales are Sweetwater and Barnes Strand: both flow amply during the wet season. Our most famous high ground is the middle of the preserve near Raccoon Point. It deflects water to the east, through Mullet Slough, into the Everglades proper.