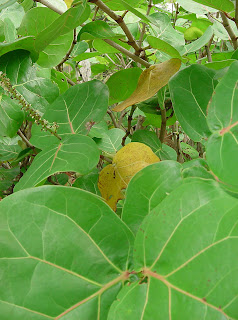 I was introduced to the “road” before I ever heard of the “plant,” thus prompting one of the stupider questions I ever uttered as a newly-arrived Floridan:

“Why did they name that road “Seagrape Drive?”

“After the plant of course … Coccoloba uvifera,” I was told, followed by a long pause.

Boy did I feel stupid.

One the other hand, I’ve also been told that there’s no such thing as a stupid question. It sure doesn’t feel that way!

So, the true order of things is that plant came first … but, for me, whenever I see that plant, I always think of the road it’s named after (in my mind), and that dead ends after a quarter mile.

Rather, that’s just where the road gets started: it’s the launching point for Halfway Creek.

As for the plants alongside the road … mostly mangroves.