Its waters measure 74° F year round.

During the winter that feels warm.

But come summer time it has a refreshing chill. 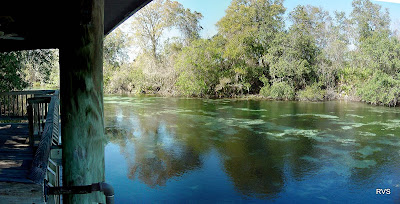 Compare that to the Gulf of Mexico whose water rise into the broth-like high 80s during the summer only to plummet down into the 60s come winter (this year even lower).

It flows at a constant rate too.

Compare that to south Florida’s Turner River. It rises to a “Weeki Wachee worthy” flow rate of 150 cfs during the summer-fall wet season, only to stagnate to zero by spring …

At least typically that’s the case:

This year’s it’s been flowing all winter!

That’s not because it’s all of a sudden become spring fed: rather, the El Niño showered it down with unseasonable rains.