I turned forty a few weeks back.

Not that’s forty’s old – it’s not, nor is monumental – I feel and look the same as yesterday:

But it is reflective.

I found myself thinking back to, if not “simpler” times, certainly ones now dripping with a nostalgia of “worlds gone by.”

Take for example me as a kid back in the Mudderland jumping from one boulder to the next in the din of crashing water in the shadows of a geologic escarpment called King and Queen Seat … wondering what might be out there in the world for me.

The actual stream of water – if you went up current or down – is officially known as Deer Creek – a small tributary of the Susquehanna, but nobody called that exact spot anything other than Rocks State Park … 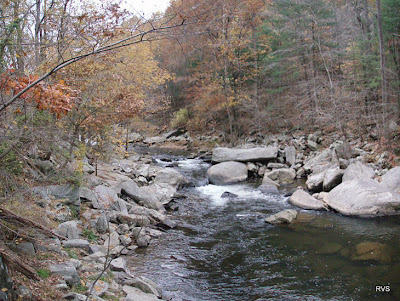 Years later I found myself at the south rim of the Grand Canyon staring down into an impenetrable stratum of subterranean clouds,

Everything below a few hundred feet was a total blur.

We’d all but given up – and were ready to head back down to Tucson – when on the morning of the final day the weather broke:

The clouds magically parted before our eyes. 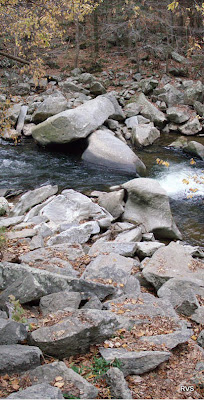 Sensing it as a sign, and perhaps with clairvoyance into the future that life would never quite present us with this exact (if also insane) chance again, we spontaneously and simultaneously succumbed to the imperceptibly faint (and in all likelihood imagined) song of the sirens in the inner gorge below:

“The river a-waits!” we concurred.

Onward and downward it would be – we would touch it by mid day, and return by dusk,

Or in hiker lingo: “Colorado River and back up again … or bust!”

Without regret and with hopeful hearts we descended Kaibab Trail.

The hike down was laughably easy, if also long, and steep.

While I didn’t age on the hike down – we did descended through a billion years worth of geology.

The river itself was a mild disappointment.

Its banks were strewn with “dinosaur egg” shaped rocks, but devoid of boulders for jumping, and extremely muddy.

Even more, the thought of Glen Canyon Dam upstream, and my recent adoption – hook, line, and sinker – of the Edward Abbey doctrine, as espoused in “Desert Solitaire” (his best) and other writings – had me shaking my head in skepticism:

“It was wet to the touch alright,” I concluded, crouching down by its murky shallows. “But was it the real river … or just a carefully engineered water release to feed the unquenchable thirst of some distant electrical power grid?”

I blacked out into a hiking-induced coma fog. There was no longer room (or time) for error, detours, or extended breaks – the hike had narrowed into a “single fold” mission:

Get to the top or bust!

Nearing the rim euphoria hit … as did a sensation of an utter and indescribable exhaustion.

We were now among the day hikers and rim enthusiasts whom, in flip flops and waterless, were taking photos, rapid fire style, in the by gone days of the film camera.

Had they only known the feat we’d just completed – 13 miles by foot and a mile down and back up again by altimeter – they should have been taking photos of us!

Instead we reached horizontal earth in the silence of a darkening sky and an uncaring crowd … and “rubber chicken” legs.

“We touched the river, it was wet, but that was all.”

The thing about forty, and probably any age before you reach it, is that it appears in the distance, way up in the sky – its peak alternatively shinny and cloud obscured – like an insurmountable mountain.

A 5th grader – all of ten years old – stands Goliath compared to a David-scale Kindergartener. I think back to the faces of the seniors I revered when I was a freshman in the same halls: Three decades later they still seem older than me, despite them having never aged from the photos as I remember them, the same way perhaps that they are quixotically “forever” young to the seniors who knew them fleetingly their freshman year.

When my parents reached the forty milestone I’m reminded of my vague notion that “wow, that’s old!” and also musing, in a perplexed state of inertia, exactly when it was that an “adult” becomes an adult, or rather, starts thinking like one?

Fast forward thirty years and here I am, more or less the same.

Not that I think like a kid – I don’t, nor have I succumbed to a middle-age craziness of trying to reclaim my twenties – I’m not; what strikes me most (almost in epiphany) is the realization that the way I think now is a continuity of how I’ve always thought … at eight, eighteen, twelve, and twenty four.

Yes I’ve added new wrinkles and “tweaked” algorithms and thrown out more than a few falsehoods, but otherwise I’m the same as I ever was.

Which brings me to why we climb mountains?

Most would agree: To get to the top.

It is true that some hike “slow” (on purpose) with the idea of enjoying the so-called “sides” of the mountain – also known as “the journey” – but that’s just the means, not the ends, which inevitably is the top.

And at the summit, what do we do?

Instead we look down:

Partly for the view yes, but mostly to see how far we’ve climbed.

That’s what bothers me most about the Grand Canyon.

You “reap the harvest” of the view without any of the work, or not much.

And one other thing –

You can’t hear river from the rim, you can only see it, but just barely: you’d swear it’s a creek if you didn’t know otherwise it was the Colorado.

Had I had the chance, here’s what I would have done on my fortieth:

Parking my car at the bottom of Rocks, I’d run across old Route 24, then proceed to jump around on the giant boulders for a good half hour before stopping to ease myself down to “splash” water on myself from the water’s edge.

Without haste, but taking proper safety precautions, I would then re-cross the asphalt, also known as St. Claire Bridge Road, and blaze a path up the steep rise on the “king” side of the cliff. Upon getting to the top, I would then proceed to catwalk out onto the geologic plank to I met its airy edge … and then – at long last – look down.

By “down” I mean back into time,

Just my time, my forty years,

And be happy that the creek is down there flowing “just the same as it ever was.”

To hear the whisper of its roar through the leaves!

The canyon’s as deep as its waters run young!