Did you ever finally get to put a face to a name?

Then you know exactly what I’m talking about when you can finally match a data set to a real-live photo of the place that it was collected.

More and more these days, data – and ample (actually endless) piles of it are available on the internet. Getting the numbers is as simple as a click away.

But there is no replacement in life for seeing something with one’s own eyes.

I had the good fortune of being out in East Texas earlier this summer.

Prior to going, I was able to get my hands on some rainfall data – going back to 1983 – collected by the U.S. Army Corps of Engineers at the headwaters of the Lower Neches River, at Town Bluff Dam. 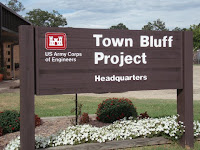 Three things jumped out at me when looking at that data:

(1) East Texas gets lots of rain – around 60 inches per year at this particular gage,

(2) Their rain is spread pretty evenly throughout the year, and

The two biggest red dots on the graph: one in July 1989 and the other one in September 2005 (Rita) both registered around 13 inches of rain.
.
October of 2006 was also notable – and caused ample flooding throughout the floodplain – for its two consecutive weeks of “red dot” rainfall, totaling 16 inches over 14 days!

Compare that to Ike – which at least at this gage, and in this part of Texas – registered around 5 inches of rain.

Those are whoppers of rain weeks even by south Florida standards!

So don’t be deceived by averages, especially when it comes to rainfall in East Texas. It’s the major deluges and extended weeks of drought that keep the water cycle on the teeter-totter up and down on either side of the average.

And about putting a face to a name: Here’s a photograph of the weather station that this data was derived from.

That’s a photograph that only a hydrologist could love!

But this view of Town Bluff Dam is scenic by any standards.

Many thanks to the U.S. Army Corps of Engineers for making this data available, and maintaining a great rain gage!

And by the way, as good fortune would have it, the U.S. Geological Survey measures stream flow at several spots on the Neches and its tributaries.

I’ll keep an eye on that in the coming days to see how high it rises up into the floodplain before it crests.